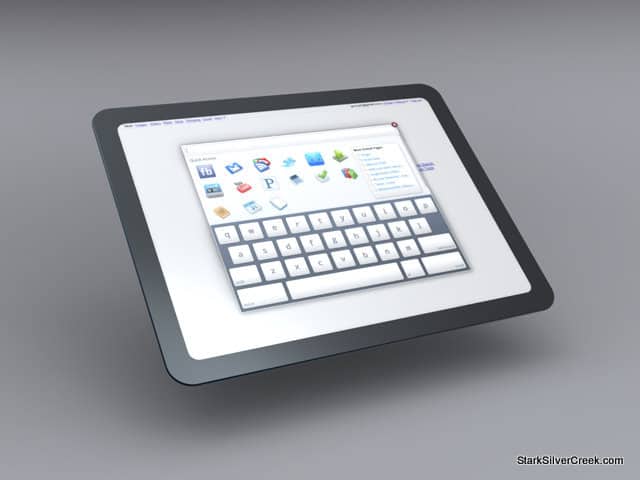 Apple (NASDAQ:AAPL) and Google (NASDAQ:GOOG) are on yet another collision course, this time for tablets.

While Apple may be first to market, Glen Murphy on a Google developer site today, demonstrates some of the possibilities of how an upcoming tablet based on the Chrome OS might operate. I don’t think there are many surprises in the photos, but it doesn’t take a stretch of the imagination to picture Google apps running on a tablet—cloud computing nirvana!

I can’t help but think the future does look mighty similar to a big Hollywood movie a few years back, Minority Report. Tom Cruise used hand motions, swiping. It was a conductor ballet of sorts, him painting the air. User interface designers must have been inspired. Touch screen and “gesture” based control is quickly becoming the norm.

When I saw these photos, I was curious to see if Google’s approach to text input would differ from Apple’s basic on-screen, virtual keyboard.

This, as others have repoerted, is the Achilles heal of tablets. Until manufacturers can offer a solution comparable to that of a standard, physical keyboard, I don’t believe the netbook market is any danger soon.

Another question: where is Microsoft in all of this? Does the era of tablet PCs and mobile operating systems belong to a new generation of non-shrink wrap tech companies?