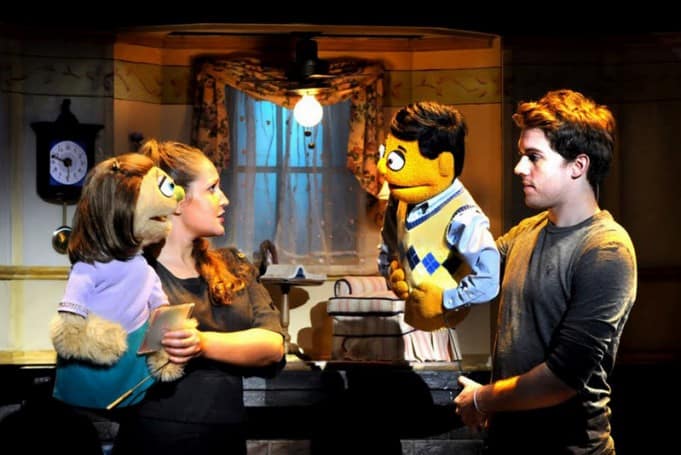 Puppets sure have changed since I was a kid—in a good way, a very good way. Don’t look for them on PBS though. You’re more likely to find this raucous lot on HBO. Last night, the tony award-winning musical Avenue Q rolled into town with a bunch of starry-eyed, cursing, puppets in tow. Yes, the full frontal puppet nudity is here, as advertised. And so are the laughs. In droves. It’s a winning formula of clever humor, sarcasm, and shock value—with a purpose… of course.

The story is familiar, but the presentation is unique.

Innocent dreamer Princeton (Brent Michael DiRoma) arrives in New York with big dreams, and a BA in English. What do you do with that? But soon he realizes that college may be an easier place than rough and tumble life on Avenue Q, somewhere on the outskirts of the big city. Eventually he’s downsized (even before his first day on the job), falls in love, ponders his purpose in life, succumbs to “bad idea bears,” drinks too much, loses his love, dates the promiscuous lady dancer from the local bar.

Musical numbers are peppered throughout along with the occasional video segment on two floating LCD monitors that descend. We learn about purpose, commitment and Gary Coleman’s Schadenfreude.

No one is safe here, the cynical jabs go wide and deep. Racism, Stereotyping. Donating your way to God.

It sucks to be me.

One of the big decisions is whether to watch the puppets, or the actors that dance, sing and control alongside. I found myself not even thinking about it. The dynamic works. Magically you get twice the emotional impact. The connection between audience and puppet is visceral.

Before intermission Princeton and Kate Monster (Jacqueline Grabois) channel their inner Spring Awakening, then toss in some 9 1/2 weeks, Basic Instinct, and top it off with an unplugged rendition of Behind The Green Door. And all of it without a lower torso. You’ll have to get to the show to see how such puppet gymnastics are possible.

Oh, you can leave your children (under 13) behind (in case you didn’t get that quite yet). Teens, okay.

Jason Heymann later told me it was their first show back after a month long break. There were some hiccups on opening night, mostly technical. The left LCD monitor was a bugger all night long, refusing to display the correct video input. The occasional backstage noise was audible, and some of the lighting cues were off. But all of this was minor, an I wouldn’t trade any of it in for the raw, energetic performance the actors deliver.

Broadway San Jose continues to bring on the hits. Their fourth show of the season (Spamalot, Spring Awakening, Riverdance), Avenue Q is another welcome show and ferociously entertaining for those ready for an evening of furry satire.