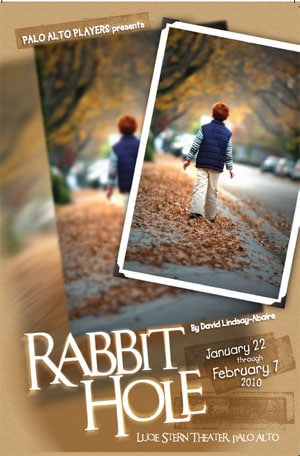 I can’t imagine many things worse in life than losing a child. We would all agree it is horrible, devastating. But as we find out in the moving production of Rabbit Hole by Palo Alto Players, the process of grieving is individual, painful, and, perhaps for this family, a lifelong journey.

Palo Alto Players, now in its 79th season, did well to choose such a powerful, clever script. Written by playwright David Lindsay-Abaire, it won the 2007 Pulitzer Price. On Broadway, Cynthia Nixon won a Tony Award playing the lead. And later this year, Nicole Kidman will appear in the film version.

When their little boy is killed in a random accident, Becca (Shannon Warrick) and Howie Corbett (Earle Carlson) find their lives turned upside down—almost as if they were living in an alternative, parallel universe. The loss is impossible to fathom. After 8 months the pain is just as sharp, especially with the toys, the memories, the bedroom. All reminders of life “before.”

Becca’s sister Izzy (Kate McGrath), a waitress at Applebee’s, has issues of her own. Pregnant to a struggling musician and no stranger to a bar fight (“so Jerry Springer!” says her disapproving sister), she wants to start her own family, despite concerns over her parental abilities.

Nat (Jackie O’Keefe), Becca’s mother, we learn, has also suffered the loss of a son. However, Becca detests the comparison; it’s not right to compare the death of a 30 year-old heroine addict to that of an innocent 4-year-old hit by a car.

Everywhere I look I see Danny.

Silence speaks volumes. There are many long, often awkward, and painful, silent moments in Rabbit Hole. They serve to remind us of the continual angst, floating memories that combat each other. How can life ever return to normal?

Just when things might be getting better, Jason (Zachary Freier-Harrison) enters the scene, first by written letter, later by unwelcome appearance at their open house. He admits he might have been driving too fast when he struck their little boy, and feels compelled to confess. For the parents though, it’s yet another painful reminder of life “before.”

His stuff is all we have left.

Jason’s short story, Rabbit Hole, which he dedicates in memory of the dead boy is an intriguing device. It’s a story about space and alternate universes, with Alice-in-Wonderland-like references to parallel lives. Lives in that world might be happy, not mourning, versions of themselves. Becca is drawn to the material, and unlike the group therapy sessions centered on religion, “a room full of God freaks,” it is based on the fundamentals of science which Jason suggests are essential to grasp its meaning. So you must believe in science to understand the infinite possibilities of space.

There are many things I enjoyed about this play.

The decision by writer Lindsay-Abaire to focus solely on the “after” events (i.e. we don’t witness the accident or any of the preceding events) means we’re strictly witnessing mourning by two parents, in two very different ways. It allows us time to feel the complexity, the humanness of a tragic loss. Just as the parents must rely now on memory, we too as the audience must conjure up images of a happy little boy; his life cut short by an accident we fortunately never see.

The acting is generally strong, with a few moments that seem less fluid. On occasion, especially in the first act, the actors appear to be too focused on hitting their marks. I’d prefer some looseness from time-to-time, especially during the Kennedy scene which provides welcome levity, “Beautiful people falling out of the sky. It’s a shame.”

When Becca and her mom clean out the boy’s bedroom, telling stories and recalling memories, it absolutely sears the heart. It hurts.

When I first saw the set the elegant set—a kitchen, living room, family room—I thought the hallway to the bedrooms was oddly placed. It juts out significantly, cramping the stage. I wondered why they didn’t open it up a little to let the space breathe. Later, when an upstairs bedroom is revealed I realized the cleverness of the design. Those interested will want to examine the set model in the lobby of the Lucie Stern Theatre.

I read somewhere that approximately 70% of couples eventually separate after losing a child. It’s a sad statistic, but after seeing Rabbit Hole I can see why.

Rabbit Hole is a gripping, honest look at life after tragedy, and how grieving is never the same for two people, even if they love each other. Hope ultimately finds a way to keep this family together. Laughter is an important ingredient. Palo Alto Players brings us a little gem of humanity. Highly recommended, just be sure to bring Kleenex.