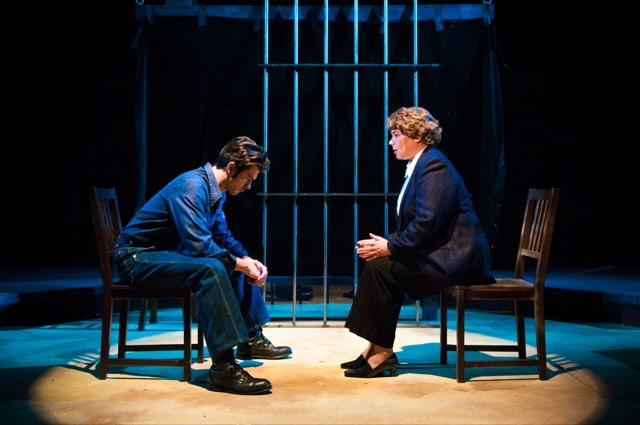 Last night, the eagerly awaited stage production of Dead Man Walking premiered at City Lights Theater in downtown San Jose. It was an evening of compelling drama, pulling at our heart strings as we contemplated capital punishment, forgiveness and atonement. Tim Robbin’s script is, of course, a classic, turned into a stellar movie in 1995 starring Susan Sarandon (who won best actress Oscar) and Sean Penn. This show is produced in partnership with Notre Dame High School.

Matt Poncelet (Thomas Gorrebeeck) is on death row for a devious crime he may or may not have committed. Sister Helen Prejean (Lisa Mallette) becomes his spiritual advisor and soon is compelled to save him, at least metaphysically, so that he may die with dignity.

The results are mixed. Perhaps a little more tuning is needed before it really captures the entire essence of the story. Still, there are many moments that stand out.

If the goal is to emotionally connect with the audience, and raise our collective conscientious then it mostly succeeds, especially in the second act.

One of my favorite moments is when Sister Helen sings, a cappella, to Poncelet. Her voice floats across the prison cells, hauntingly, as he struggles to find redemption.

The story is told with an interweaving narrative delivered by Lisa Mallette. This is a good choice, as it gives us access to her thoughts, her emotions as she undertakes the ominous journey. Small projections, at the upper left and right of the stage accent key moments with close ups of old photographs, and the occasional statistic on capital punishment.

I did struggle to accept Mallette as a nun; not because she wears street clothes, tells jokes and is vulnerable. Rather, her accent and body language do not impart the holy powerful enough in key exchanges.

Thomas Gorrebeeck, however, delivers a fine performance as the conflicted, complex and confused inmate. His early swagger and defiance melt away later to reveal despair, then internal peace.

Unfortunately, the stage is clunky because of its wooden construction, and tiered layers. While it works well to provide multiple locations—jail cell, home, courtroom—without the need for set changes, it distracts as actors stomp across it. This is most prevalent in scenes where multiple security guards and others are marching in and out of a scene. At times it made dialog hard to understand.

I wonder if this material can really work in stage form. The film relies heavily on close-ups, revealing angst, pain, untold stories in each line on an actor’s face. It’s a challenge to replicate without the benefit of this intimacy.

Dead Man Walking ends with emotional heft, the last few scenes effective. After the execution we’re left with a pair of storied boots, and time to reflect on life, redemption.