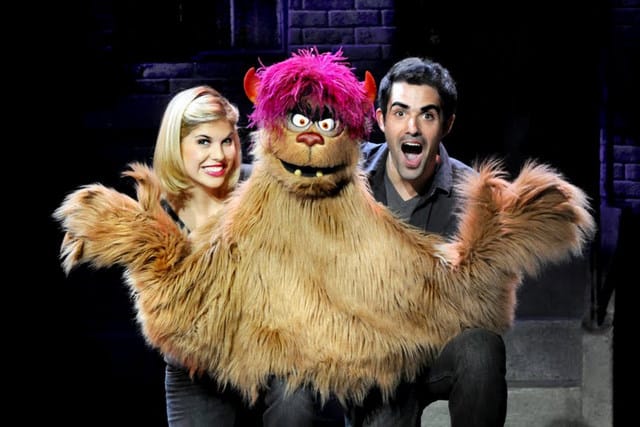 Avenue Q, or puppets gone wild, opened this week at Broadway San Jose. The laughs can still be heard echoing across downtown. The reviews are strong, and since the show is only in town for the next few days, if you want your fill of full frontal puppet nudity you should go soon. Broadway San Jose throws a fun opening night, and Avenue Q was no different. The crowds flowed into the SJ Center for the Performing Arts as buzz grew in the lobby. Could these puppets out-shock even the cast of Spring Awakening? (the on location video is below).

The theater is one of the largest we cover. The 3,500 seat capacity can either work against or for the performers. Thankfully on this night, the energy was amped. Also, as our favorite guy around town, Sal Pizarro of the San Jose Mercury News, pointed out in his column, the audience was definitely younger for this show. I noticed that too. You need only quickly scan the seats, paying particular attention to hair color, and hairlines (I know all about the challenges of the follicle).

But there’s an even easier, and more interesting way, to guesstimate a theater crowd demographic, and it involves a smartphone… preferably Droid (but I suppose iPhone or BlackBerry will do)…

All you need to do: check the Twitter stream. 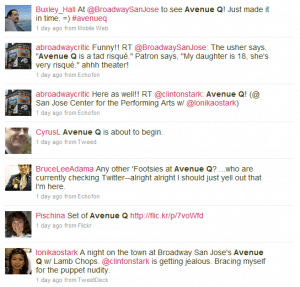 For Avenue Q, it lit up, with all manner of Tweets, photos (although I was surprised some took photos of the set), descriptors, and pithy observations. It’s great to see theater and theater go-ers embrace social media! It’s taking time; longer than, say, the wine industry, where wine bloggers have unified en masse around Twitter, Facebook and Blogs. Part of that is the regional nature of theater, versus the national draw of wine and wineries.

Broadway San Jose, as I mentioned in my review, has the TweetSeats. And the San Jose Repertory Theatre announces a Twitter hashtag (an identifier used to follow a topic on Twitter) before each performance. 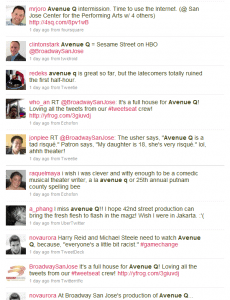 Ironically, a lot of people actually “chat” with each other at the very same show they could be easily talking in person. But being privy to the dialog can be entertaining, sometimes even informative.

The after party at Morton’s Steakhouse was another classy event by Broadway San Jose. A good time was had by all, and the place was full of vibrant conversation about the show, the actors… and that puppet scene – “with no lower torso!”

We ran into several familiar faces, talked with the actors (sans puppets), and recorded an interview as well.

But, the big question is: what the heck is Lamb Chop doing in this video?

Loni surprised me with a questionable burst of creative direction when she sprung the puppet from her purse on the way to the show, “It was a Christmas gift from years back.” I’m not so sure this will become a regular co-host quite yet. And, please, no more puppet gifts for Loni.