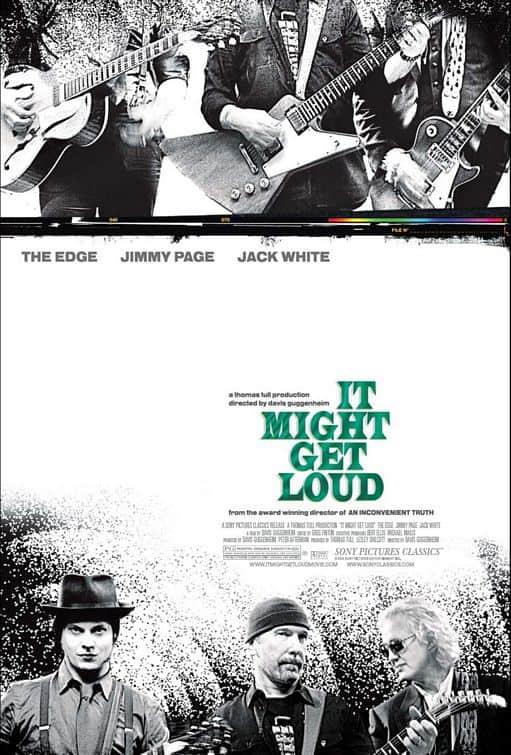 4.5 out of 5 stars - 'Right on the Money'
Directed by Davis Guggenheim
Starring Jimmy Page, The Edge, Jack White
Review by Clinton Stark 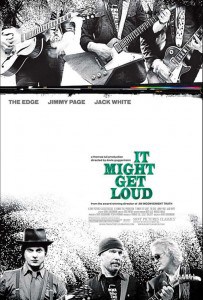 “It might get loud,” says The Edge with slight smirk. And boy does it, as he tears into a processor intensive, reverb heavy riff from U2’s Get On Your Boots.

Although music is featured prominently in the documentary It Might Get Loud, it’s really about exploring the window into the creative process. Three generations of guitar virtuosos tell their respective stories: The Edge (U2), Jimmy Page (Led Zeppelin), and Jack White (The White Stripes). I watched it twice. Once heading Northeast up to Canada on United. And again, heading Southwest (aren’t they supposed to play a different movie?). When I saw it repeat, I originally thought, oh no, not again. Minutes later I was asking Loni for a scratch pad, and taking notes while the material drew me in even deeper second time around. Such is the power of creativity, personality and artful film making.

More on that in a moment. First, I’ll admit I have almost zero credibility when it comes to guitars and the history of rock. I was a keyboard player for a short stint playing for a band called Hit ‘N Run around 1990 (the leather pants and hair spray are still in my parent’s basement somewhere in Ottawa). I relied heavily on MIDI and my trusty Dr. K. software running on an old Atari ST computer.

But wait, rewind for a sec. Before that, I was actually on my way to becoming the next Benny Goodman.

I remember standing at a bus stop, wind chill about forty below, clarinet case in hand, waiting for a bus that would take me to a square, florescent room where I would practice scales and arpeggios. All this while my friends went into the 1985 and 1986 NHL drafts. You see, every young Canadian child eventually faces the most cliché of crossroads: clarinet or NHL.

So, yes, read what follows, from an admiring bystander, with a grain of salt.

If you were looking for a history lesson, or a slightly less comical School of Rock, you’d do well to start with these three guys. Not only are they superstars, but they also have personality to spare—telling one great story after another. In my eyes at least, it’s this passion and internal force they demonstrate that may draw even the casual viewer into their world of home made guitars, touring bands, obsessive practicing. And, of course, the search for the next big sound.

Jimmy Page is a legend. In the film, fortunately, he comes across a cheeky, humble, intelligent and witty aging rocker. It can catch you off guard; try to imagine this gentle 65-year-old flogging a Gibson in the 70s before tens of thousands of screaming (and likely stoned) fans. Stairway to Heaven. Ah, yes. The greatest guitar solo of all time.

But his path to rock ‘n roll fame would start actually playing something called “skiffle” which I had never heard before. He calls it a “community project, vocal cuisine, very English pre-rock.”

When asked as a child what he wants to do when he leaves school, he responds, “biological research.”

He would swim against the flow eventually though. Calling pop music rubbish, they sought to change the rock landscape. The press though, he laments, just didn’t get it. One review in particular still gets under his skin. Not necessarily the content, but that the magazine only dedicated 1 paragraph to what would become one of the most famous albums of all-time: Led Zeppelin.

If Jimmy Page is a gifted, musically astute guitarist most likely to jam with minimal effort, then The Edge, by comparison, is a scientist. Surrounded by pedals, racks of processors and computers, he’s like a some kind of modern day rock conductor. Or as Page calls him, “the architect of sound.”

The Edge is lead guitarist for the biggest name in rock today: U2. Their story starts on the streets of Dublin, amidst violence, bombings and an economy that “was in the toilet.” This backdrop of angst would shape the band’s sound, and Bono’s raging lyrics and energy.

He recalls being stuck with bland music and disco piped to the masses via Pop of the Tops. “If one out of ten songs was cool, you were lucky.”

In the summer of 1978 he found himself in a music shop in New York where a futuristic looking guitar grabbed his attention. He bought the “explorer” and it ultimately defined the sound of U2.

As much as I love U2, and as gravitating a force that is Jimmy Page, the most interesting character here, hands down, is Jack White. This is a guy sent to us from the past. When knee jiving, hand boning, or whatever you call that New Orleans style, was the way of life on the streets. Somehow, he channels these ghosts into an incredibly inventive, hyper energetic new sound that he brings to life with his ex-wife as drummer in the band The White Stripes. I’ve never listened to them before, but after watching this film I will be definitely doing some more homework.

If you dig deep enough into rock ‘n roll, you’re on a freight train headed straight for the blues.

His style is polar opposite of The Edge. You need to “fight man made materials.” And, as he explains, if you dig deep enough into rock ‘n roll, you’re on a freight train headed straight for the blues.

Fittingly, because it’s also bizarre, he grew up in Southwest Detroit in a Mexican neighborhood. His musical education would come working at an upholstery store. A record by Son House caught his attention and “spoke to me in a thousand different ways.” It was one man against the world, one song.

I really enjoy director Davis Guggenheim’s (An Inconvenient Truth) technique in telling this story. It feels so natural, easy going. There are no fancy camera shots, rapid-fire cuts, or forced scenes. Instead, Page, The Edge, and White get to tell their story, their way.

We see each all three in their creative process too, which for me is always fascinating; to see The Edge relive early four track recordings of the famous licks from ‘Where The Streets Have No Names’ does electrify my neck hair, and quicken my pulse. Wow.

Ultimately the three generations of musicians meet, and we see great respect for each other’s vastly different technique and story.

At the end, they jam, with the highlight being ‘Take A Load Off Annie’ where Jack White’s vocal strength shines. Jimmy Page just shrugs “I can’t sing.” The Edge tries, weakly, but decently. Then Jack tells him not to worry he’s not here to sing, he’ll take care of it.

One of the most striking visuals comes at the end. It’s something Quentin Tarantino might frame. We see Jack White at the side of a dusty old road in the middle of nowhere. He packs up what looks like 9-year old son into a suitcase and tosses it into the trunk. Then motors on his way.

Ed – thanks to Posey for pointing out corrections and typos in this article.