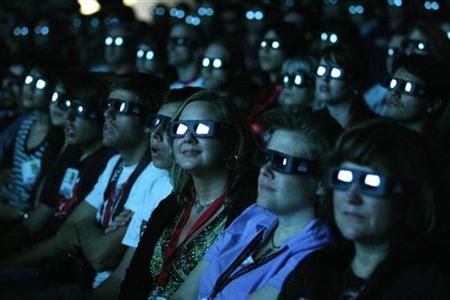 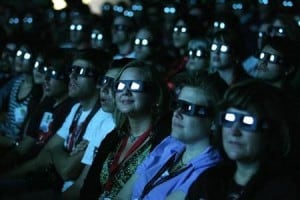 At CES, what’s old is new again. Indeed we are witnessing the great tech circle of life. I didn’t live through the 1950s, but it’s nice to be part of the second go round. If we’re learning anything from CES and tech so far in 2010 it’s that the future may lie in the past. Also, so far at least, the show has yet to produce anything worthy of  a major headline. Likely, that ground breaking announcement—at least in terms of hype—will come later this month when Apple launches its much rumored and anticipated tablet. Meantime, we have hundreds of imitators at CES, all likely to pale in comparison. And we also have 3D…

Nothing like a billion dollar gross from Avatar to wake up an industry; hey, there’s money to be made in 3D! Given the sorry state of the Hollywood box office (although recently improving) and declining DVD and Blu-ray sales, it’s no surprise that many a latte-fueled meeting is taking place to figure out the next big thing. Something. Anything.

In the 1950s, 3D aka “stereoscopic” (and for a thankfully very brief time, smell-o-vision) were a big deal.

With the love affair for sci-fi and monster movies, it was a match made in multi-dimensional heaven. Who can forget zombified theater-goers sitting with red and blue 3D glasses, and a box of popcorn to see It Came From Outer Space.

Then a revival struck in the 1980s. Although, again, the quality of material was highly suspect with movies such as Amityville 3-D, Friday the 13th Part III, and Jaws 3-D.

The novelty did not last though. And I doubt it will this time, either, despite the major advances in technology, and seemingly infinite desire of manufacturers to push the 3D products on us.

Perhaps the biggest issue are still the glasses. How geeky and inconvenient. Not exactly a comfortable way to sit and enjoy a movie for  a few hours. Then, there is the whole issue of buying all the equipment. You need the glasses. You’ll likely need a new television, and special equipment (or upgraded player) to view the new movies. However, studios of course don’t care about all this. They want you to go out to the movies. And 3D gives them a potential differentiator—something you can’t get at home.

There are over 115 articles on Google News covering the topic “3D CES” in just the past few days alone. All told there will be thousands over the duration of the show.

My prediction: the hype will fade. Some special films (like Avatar) will play in 3-D, but mainstream will remain the same.

Another repeat. The industry has tried over and over again to make us want a tablet (remember the Apple Newton?). Over and over again, consumers have showed no interest. Zilch. That’s because tablets are a niche product. They have been successful; in warehouses, hospitals and factories. For the rest of us laptops (and netbooks) are like luxury tablets… they even have full QWERTY keyboards that help productivity (you know, for typing), a convenient design that allows for easy laptop use, and, bonus, a flip down cover that protects the screen and makes the whole unit portable.

Want a litmus test of how little consumers care about tablet PCs? Go to Best Buy, Costco, Fry’s. Count the number of tablet PCs on sale. Then compare it to the laptops and notebooks. I’d guess you won’t likely even find a table anywhere in sight.

The other problem: smartphones. Who needs a bulky tablet when you can get all the same functionality using a smartphone (iPhone, Droid) that’ll slip into your pocket?

But at CES, tablets are all the rage. It seems like everyone—everyone—is launching some form of tablet device.

There are over 1,700 articles on Google News covering the topic “tablet CES.”

However, if one company can make the tablet a success it would be Apple. They are the only company that can do it (I don’t include e-Readers such as the Amazon Kindle as a tablet, although it’s likely these devices will eventually merge).

I expect the new Apple tablet to have at least 3 whoa, aha, gasp-out-loud type innovations. One of them will need to be keyboard input. If Apple gives us a tablet with a highly usable keyboard device (with identical QWERTY speeds) then it will be a gigantic step forward.

Battery life will need to be another. Will it be possible to use a tablet all day to read newspapers, magazines and surf the web? The iPhone can barely do it, and that’s with a much smaller screen.

Finally, it will need to be slim, sexy and light.

I’m still not convinced the tablet PC market exists for mainstream consumers. But, Apple has turned the world on its ear at least three times before (Mac, iPod, iPhone) so we’re talking a hall of fame career. They’ll get their swing at the plate in just a few weeks. I expect it to be an amazing announcement. Will consumers open their wallets though?

My prediction: Apple will rock the market. If they can give us a usable virtual keyboard it might just work. Otherwise it will continue to be a niche product.