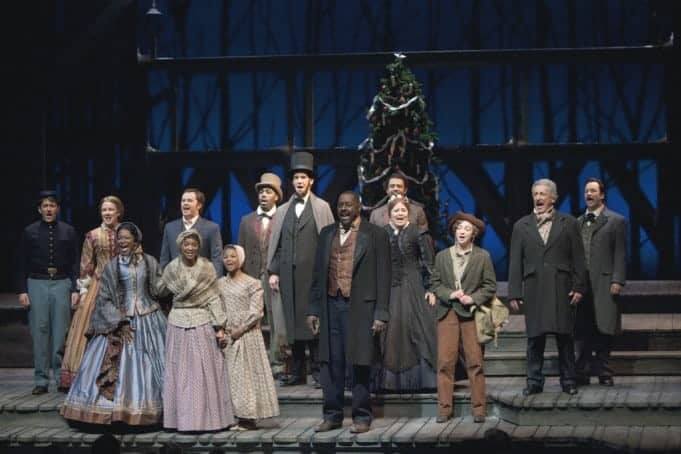 Set in 1864, A Civil War Christmas is filled with so many luminous scenes and touching moments you almost forget the yuletide history lesson also enclosed in this most welcome theater gift.

This is classy theater, told with elegance; it embraces our differences, celebrates this country’s storied past, and weaves a holiday musical celebration that simply should not be missed.

There’s a moment in any show as the lights dim, and a hush falls over the audience. It’s that moment you discover if something feels right; it suggests what you’re about to see is perhaps special. On this occasion, as the blue backdrop at Lucie Stern came aglow amidst the barren trees on a chilly evening by the Potomac, I knew Paula Vogel’s play would shine.

And shine it does—as bright as the star on Mrs. Lincoln’s repossessed Christmas tree.

A talented cast of 14, with a healthy number of equity actors, play over 100 characters; in almost any circumstance, a recipe for disaster, or at least mayhem. While I’m sure backstage is an active and exciting place in a show like A Civil War Christmas, you’d never know it, not even for a second.

It’s Christmas Eve in the City of Washington and the nation is split by Civil War. Confederates and Union soldiers on either side of the Potomac River count their losses, reflect on family, and contemplate their humanity.

Meanwhile a slave and her child make their way up North to Washington braving cold nights in an effort to escape the clutches of slavery. Why not? It’s 1864. A time “when anyone could walk up to the White House and demand to speak to the President.”

As we are drawn into multiple lives, taken on a journey across State lines, we are enraptured in wonderful holiday songs that integrate seamlessly into the production—better than anything I’ve seen in a long time. This is not your typical song—stop—scene—stop—song musical.

In addition, the set, with its rich layers of color, lighting adds dimension.

You can feel the chill of the brisk nights along the Potomac one moment, the warmth of a crackling fire next or the joy of a holiday celebration with song and punch at the White house.

Then there are the costumes: spectacular. Authentic, detailed. Veteran costume designer Fumiko Bielefeldt has the done period and the material justice.

And, of course, what would a Christmas show be without the songs? Again, we are treated to a unique presentation. The classics are mostly here, but instead of straight ahead numbers, we’re treated to elegant re-arrangements—some simple, others sophisticated. In one touching scene, Silent Night carries added dramatic weight as a mother warms her freezing, near death child in a wagon.

A Civil War Christmas is a classy, historic celebration. As theater, it is first rate.

TheatreWorks continues to celebrate its 40th season in fine form. Robert Kelley and his team impress with a series of intelligent, thought-provoking, and most importantly, entertaining, productions.