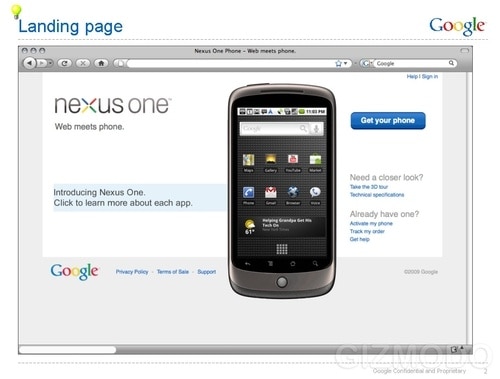 If we’ve learned one thing in tech over the past 24 months it’s not to bet against Google (NASDAQ: GOOG). You need not look any further for an innovative engine or competitive culture than the $200B Mountain View giant. In some ways the company reminds me of Cisco in the early-to mid-90s; aggressively acquiring start-ups and competitors to plug portfolio gaps or to rapidly enter new markets.

And it looks as though one of the biggest stories of 2010 is about to unfold just next Tuesday (Jan 5th) when Google is rumored to launch its very own smartphone, the Nexus One, on the T-Mobile network.

As a fan of Android and Moto Droid owner, I’ve watched this story unfold with keen interest. Early photos of the Nexus One in the hands of Google employees over the holidays and speculative articles about Google’s impending January announcement appeared in the the usual cadre of tech sites like Engadge, Gizmodo, TechCrunch, Mashable, and Boy Genius Report.

But, as more information spills out, I wonder if Google is attempting the impossible.

By selling smartphone hardware and licensing the very software (Android) used to run it to other manufacturers, is Google setting up an unavoidable recipe for channel conflict?

Of course, there are two things to keep in mind: (1) the Nexus One is only a rumor. But the tech media, especially Blogs have proved prescient when it comes to these types of monster announcements—time and time again the reports turn out almost spot on nowadays; and (2) as just about anyone will tell you, never bet against Google.

Once again Google is going big.

We’re not talking about a niche market. No, the cell market is massive at approximately $200B per year in sales (despite slowing and even declining growth in recent quarters). It is also mature, and run by old school carriers—AT&T, T-Mobile, Verizon, Sprint—who have survived their share of bloody battle for market share and margin. Government regulation has played an important role in the evolution of the current market structure. The 1996 Telecommunications Act, which broke up Ma Bell into regional providers, and opened the market to competition—the first major upheaval in the industry in 62 years—demonstrated that change in the industry could be extremely painful for many companies.

So here comes Google. Not content to merely enter a market, they once again look to change the game.

Software – Own the Platform

Like RIM (BlackBerry OS), Apple (OS X / iPhone), Microsoft (Windows Mobile) and Palm (WebOS), Google released an operating system for smartphones. Dubbed Android it is licensed to manufacturers such as Samsung, Motorola, HTC who build handsets that then are offered on major US carrier networks. It’s a good strategy. Unlike the closed ecosystem of Apple, for example, that sells only its phones running its software, Android is wonderfully open. The thinking: why fight this battle alone? Telecom is a game that requires deep pockets, and many partners.

Android was born in 2008 with first generation device G1 running on T-Mobile. It grew up in 2009, especially in Q4 with the launch of the Motorola Droid which saw the first major advertising campaign (‘Droid Does’) for Android, targeted at Apple iPhone.

I predict, like many, that 2010 will be the breakout year for Android.

But, with the imminent launch of the Nexus One next week, is Google attempting a high wire act that will sour partners and disrupt momentum?

Likely not. However, Google is taking a risk, no doubt.

Hardware – License or Build Your Own?

By selling their own phone they could potentially alienate companies such as Motorola, Samsung and HTC who have banked their futures on Google’s mobile OS. After all, it’s plain to see that Google would have a distinct competitive advantage when it comes to engineering access, for example, or strategic planning. They know exactly where Android is headed. Partners will not. They will have information, yes, under NDA. But Google’s left hand will always know what the right is doing.

An alternative view, though, suggests that Google’s entry into the hardware space (note that the actual Nexus One smartphone will be built by HTC) is a boon to all. With deep pockets, and seemingly infinite market budgets, anything Google does to promote the space will benefit all players. That’s possibly true.

Microsoft, despite spending billions on Windows Mobile and trying for years, has never secured a foothold with its mobile OS for smartphones. Early releases were plagued by familiar failings: crashes, incompatibility, a difficult non-intuitive UI, limited third party application support. And while a lot of that has changed over the years, Microsoft faces yet another repeat play: delays in the next release. Windows Mobile 7 has been delayed countless times, with reports of the next release now targeting end of 2010.

That’s too little, too late.

RIM has a loyal and still growing BlackBerry base. Apple is the king of design and content, and will lead with iTunes and iPhone in that department for years to come.

But Microsoft doesn’t have a foothold.

And here comes Google to the party, with partners in tow, its own phone, and an open OS in Android that is gaining massive momentum.

Can Google Transform Yet Another Industry?

Let me help you answer that question, by ruling out “no” as an option.

2010 is shaping up to be a great year in Tech. Once again our friends at Google will lead the way. Expect more over the decade. Times, and industries are indeed changing. But one thing is certain: don’t bet against Google.