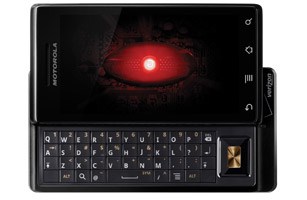 Seems I have good taste in gadgets. My now 4-week old affair with the metal and glass behemoth that is Droid has been an especially enlightened time in my life. Loni had to get her hair, nails and eyebrows done this weekend to compete. And even then I was too busy downloading another Twitter app so I could tell people about the Droid. Or, just to say “I’m here!”

The writers at TIME must know what I’m going through when they announced the Moto Droid as the #1 gadget of 2009. It’s nice to know I’m not alone. This is a mental collective.

They called it “Android’s first credible challenge to the iPhone.”

That’s true, especially if you want to be anywhere but on AT&T’s notoriously flaky 3G network. I’d hazard a guess, though, that most buyers are young males, with a proclivity for reading sites like Engadget and Gizmodo, and “rooting” in their spare time—not for the Oakland Raiders.

It’s not a bad thing that they’ve ensnared a gadgetgy, early adopter tech-savvy lot. But, as I’ve said before, Google needs an iTunes killer—now—if they want to really reach mainstream consumers. A one-stop-shop for all things content such as TV shows, movies, music, podcasts, and apps is what I believe the masses want.

Still, if anyone can do it, Google would be my top pick. In less than a few years they’ve mounted a formidable attack in the mobile market. Apple will continue to do well. RIM and Microsoft (Windows Mobile) are the ones that should be sending out SMS messages in distress.