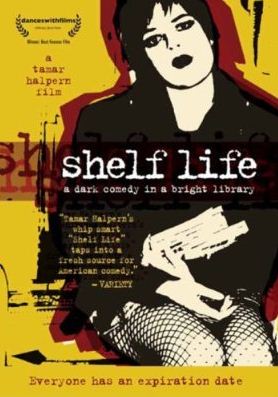 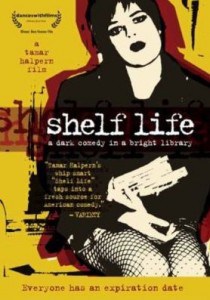 Who knew a library could be grounds for such wicked office politics? It all starts when a fresh-out-of-rehab goth slacker Nikki Reynolds (Betsy Brandt) takes a job at the local library. Strict, by-the-book head librarian Betty Bonhauser (Elisa Bocanegra) is quick to remind everyone using a flip chart of her family’s successful librarian lineage.

She is not pleased to have a gum chewing, loosy-goosy rocker, adorned in leather, potentially disrupt her neat row of erasers, pens, rulers. And, of course, the books—organized in dewey decimal dream precision.

This is another little, clever Indie film from Cinequest. We’ve been working through the online catalog of DVDs of Cinequest releases over the past few months, building up to Cinequest 20, the festival’s 20th anniversary in February 2010.

With Shelf Life, it’s another case of less is more.

A smaller budget often results in stretched creativity, in a good way. And Shelf Life is another such example. Completely lacking special effects, set in a simple library, with no star actors, the film entertains with one witty scene after another.

The story is told in flashback with the two leads telling their version of events that ultimately results in a climactic battle royale, fisticuffs, and some sort of fire. An unlikely romance blossoms between the History and Young Adults section, when stuttering, supremely loyal employee Ray the Mumbler (Richard Ankrom) explains to Nikki how to shelf returned library books.

Initially foes with disdain for each other, both Betty and Nikki share their passion for the library, learning and children. A puppet show eventually bonds the two temporarily before an ensuing rumble once again turns the staid environment into a WWF-like free-for-all.

But the real surprise is the ending which sheds new light on the mock, courtroom scenes that precede it. Clever!

The direction (Tamar Halpern) is decent, and camera work (Steve Elkins) fair given the material. You won’t mistake this for a larger budget film, but what matters here are the laughs and the characters. And Shelf Life scores on both counts.

A common Indie film criticism applies: it could be shorter by at least 15 minutes. I know it’s tough to cut. All that work; your baby. I realize film makers want to ensure their film will qualify for feature length at festivals, but cutting length in overly long scenes helps tighten narrative, and maintain momentum. Often, the audience can connect the dots more effectively without extended dialog, for example.

Still, Shelf Life is a clever and unique dark comedy. And definitely worth “checking out” when you hearken for something less Hollywood-explosive, more Indie cool.