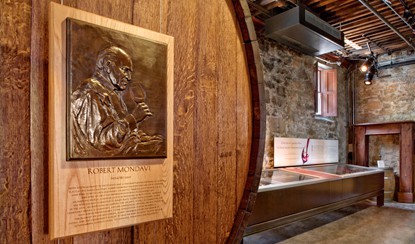 The Culinary Institute of America (the other CIA) based in St. Helena, California today announced the Vintners Hall of Fame 2010 class. The five new members to be inducted are Randall Grahm, Andy Beckstoffer, Al Brounstein, Zelma Long and Leon Adams.

When we toured the hall earlier this year (see below for video tour) Loni wondered, “where are all the women?”

The long, dimly lit, barrel room on the second floor of the CIA is indeed a mostly male place with famous names and faces such as Robert Mondavi, Ernest and Julio Gallo, and Charles Krug. But there are a few woman who also adorn the hall and have left their mark on the industry.

Carole Meredith pioneered the use of DNA to analyze relationships among grape varieties. Jamie Davies (along with husband Jack) forged a path of producing high quality sparkling wines.

And now the hall will have its third woman, Zelma Long, who became one of the first woman to run both a the winemaking and business sides of a winery.

So, Loni, when will you be inducted?

The ceremony will take place March 2010.

Randall Grahm was educated at UC Santa Cruz and UC Davis, while earning a reputation as an “enfant terrible” for telling everyone he planned to make the first great American Pinot Noir. Instead, he found himself entranced by “ugly duckling grape varietals” thereby introducing American consumers to vinifera far beyond Cabernet and Chardonnay. His vintage 1984 wine “Le Cigare Volant” proved that it was possible to craft and sell great Rhône wine blends from California. His amusing marketing still defies and at times defines the pretentious approach, such as when he held a funeral for the Cork (aka Thierry Bouchon) in 2002. Grahm, a longtime proponent of biodynamic viticulture, downsized his production in 2006 to focus on small estate wines. His first book, Been Doon So Long: A Randall Grahm Vinthology, was published by U.C. Press in 2009.

Andy Beckstoffer came to Napa as a corporate executive in 1969, after earning an M.B.A. from the Amos Tuck School of Business at Dartmouth College. Recognizing the potential for growth in premium wines, he started a farming company which he eventually purchased in 1973. Beckstoffer Vineyards has grown to be the largest vineyard owner, farming group, and winegrape seller in the Napa Valley and the North Coast, delivering grapes to more than 100 of the state’s most famous wineries. Andy Beckstoffer developed a formula for paying growers based on the finished wine value, thus reducing the incentive for excessive yield and focusing growers on quality. He has played a major role in preserving agriculture in the Napa Valley and has contributed to efforts to restore the Napa River.

Established in 1968, Al Brounstein’s Diamond Creek Vineyards was the first wine estate in California to be planted solely with Cabernet Sauvignon. Noticing three distinct soil types on his property, Brounstein became one of the first California wineries to produce different Cabernet Sauvignons from single vineyards (Red Rock Terrace, Gravelly Meadow, and Volcanic Hill) on the same estate, setting the stage for what was to become known as super-premium Cabernet Sauvignons from Napa Valley. His 1978 Lake Vineyard Cabernet Sauvignon – a wine produced only in exceptional years – was the first California wine with a suggested retail price of $100 a bottle—an important milestone in the production of premium wine from California. The graceful aging of Brounstein’s wines continues to be one of his main legacies to the fervent fans of Diamond Creek wines.

After studying enology and viticulture at UC Davis in the late 1960s (where she was the only woman in her class), Zelma Long became the chief enologist at Robert Mondavi Winery, while also helping to establish Long Vineyards. She spent the 1980s and 1990s breaking the glass ceiling at Simi Winery as winemaker and CEO, becoming one of the first women to run both the winemaking and business sides of a California winery. Regarded as one of the early technical leaders in winemaking, Zelma has received national and international awards, including induction into the James Beard Hall of Fame in 1996 and receiving The James Beard Wine and Spirits Professional of the Year in 1997. Today she and her husband, Phillip Freese, are producing wine in South Africa under the Vilafonte label.

Considered a seminal historian of wine in the United States, Leon Adams is best known for his 1973 book The Wines of America, a comprehensive and ground-breaking history and survey of wine and wineries throughout the country, which celebrated American regional wines and their styles. Mr. Adams was a tireless advocate of the farm winery bills passed by many states in the 1970s and 1980s which eased the way for grape growers to open wineries and sell their wines retail and wholesale. Leon Adams was also a founder of the Wine Institute, a public policy and advocacy group for California wineries.