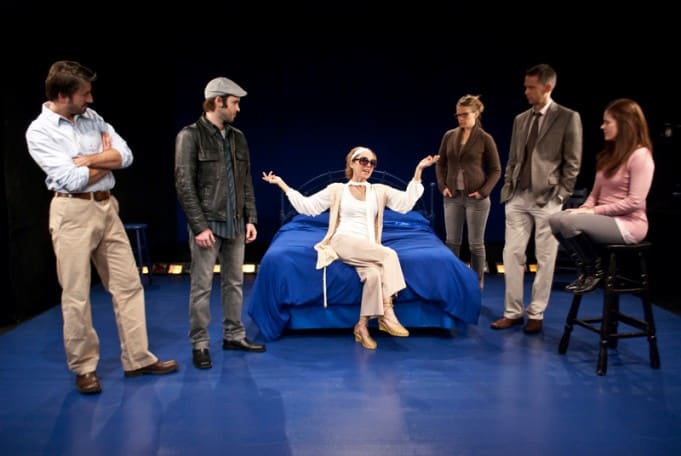 She Stoops to Comedy

“It’s a pseudo documentary about reality in the theater,” says one of the characters/actors in David Greenspan’s She Stoops to Comedy which premiered last night at SF Playhouse.

The pieces don’t add up and instead of a clever re-imaging of Shakespeare’s As You Like It, it’s an artsy, disjointed series of vignettes that test every device known to stage: from breaking the fourth wall and confiding with the audience to theater of the absurd and nonsensical references and expressions.

The story is loosely based on As You Like It; weak material to begin with, the idea to transform it and update seems like a compelling idea—if not exactly uncommon.

Liam Vincent, a man, plays Alexandra Page, a woman, footloosing as a man in order to score the part of Orlando in the play-within-the-play (actually in this case, film-within-play) version of Shakespeare’s classic. His (or her) counterpart is played by Amy Resnick, a woman, who plays a man masquerading as a female. She is a former archaeologist turned lighting designer. On occasion she (or he) alternatively and simultaneously plays two characters, Kay Fein and Jayne Summerhouse.

Yes, this one will have your head spinning a little. And that’s partly the idea. What’s reality, what’s fiction, what’s the role of gender?

“I’m no longer an archaeologist, I’m a lighting designer!”

Amy Resnick performs a crowd pleasing two character scene, alternatively playing the macho-esque Jayne Summerhouse, then switching to the diva-like Kay Fein. The banter and escalating argument later results in a tender snuggle fest on the prominent purple bed in the middle of the set.

“How many times can you be a cockeyed optimist in Pittsburgh?”

The rest of the cast is good, with a few weak spots. Scott Capurro, as a middle-aged self-loathing gay man with Aids, delivers an impassioned monologue, “who needs another play about him?” that questions his sexual identity and significance in the world. A dramatic high point. But, again, as an individual scene it works, but unfortunately like most of the play, it feels disconnected.

She Stoops to Comedy will appeal to those who enjoy multi-layered, absurdist, sexually charged theater with plenty of in-jokes, references, circular logic and intellectually-barbed dialog.

For most, though, including me, it’s somewhat less successful as pure comedic entertainment. It’s more art house and acting school clinic then it is a successful retake on As You Like It.