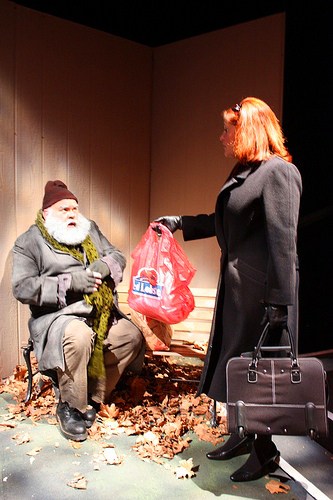 Another Night Before Christmas

Is Santa Claus real or is he just a homeless man with a jolly attitude, bursting belly and good sense of humor?

Grumpy, burnt-out Karol (Lisa-Marie Newton) must search for the answer when The Man (Michael Johnson) breaks into her home on Christmas eve.

His motives are unclear; instead of stealing her stuff, he brings in a bag of goodies. Later, he pulls out all the stops in an effort to convince Karol that Christmas is worth celebrating, and transforms her downtown apartment into a blinking, red and green wonderland.

Karol, however, carries a big chip on her shoulder. Years of failed relationships and an often unsatisfying job as a social worker has left her bitter and certainly adverse to the idea of Jingle Bells.

Worse still, the new HAL-wannabe security system has a mind of its own, and asks her to change the pass-code incessantly while calling her anything but her real name.

Meanwhile, The Man, is of mysterious origin. He looks like Santa. Knows a lot about Santa. And he definitely acts like Santa—jolly,large, with plus-size white beard. He too has his own issues. “You try looking thin in red!” he says to Karol in exasperation as she slowly warms to the idea that this may indeed be more than just a homeless man in need of a shower.

Is this the same Santa Clause she wrote to as a 6-year-old, when she actually believed in him for “about 15 minutes?” And why has The Man entered my life, why me?

Some of these questions are answered. It’s part of the thrill of the production; it’s a unique premise and the set-up clever. However, there are many rough edges in the script and dialog that result in an uneven show. The two actors do what they can, with occasional breakthroughs, despite the kludgy material. It’s too bad. Perhaps a re-write or two, and some close work between the writers and the actors would provide the polish needed to fulfill its potential. Also, there are too many scenes where not much happens.

My other issue is with the character of Karol. She’s hard. A grumpy old lump of coal. Perhaps too much so. We’d like for a moment to see that she has a heart, has some hope. Later the transformation does happen, but it’s so dramatically counter to everything we know about her up to that point that it seems trite.

Regardless, there are some charming moments in Another Night Before Christmas, especially in the second act when the story picks up momentum. One highlight is the musical number ‘I Want to Kill Bing Crosby.’ The chemistry, singing, and laughs hit home perfectly.

Both actors do fine work and should be commended for carrying a two hour show with emotional ups and downs. It’s always a pleasure to take in a show at City Lights. The sight lines are great and the atmosphere so well suited for productions such as these. If you don’t mind a few script hiccups, you could still find a lot to enjoy in this show—there is an uplifting message here that could re-energize your holiday spirit.