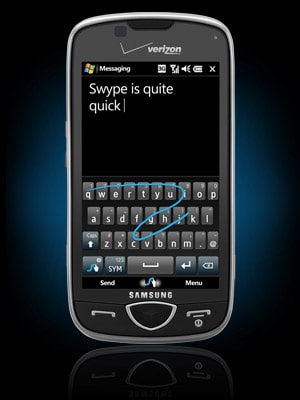 A promising new technology from a Seattle-based company called Swype appears to be a compelling alternative to hunt-and-peck typing on the trusty old QWERTY keyboard. It’s another potential start-up success story launched at TechCrunch, in 2008.

Instead of tapping on keys, the user types words by tracing a path across letters. Some how, some way, using secret sauce and a magical black box, Swype determines what the words you’re typing. It makes for a nifty, “a-ha!” style demo.

CEO Mike McSherry’s goal? “To change how the world inputs text on screens.”

And he may be on his way to achieving that vision, albeit one baby step at a time. In recent weeks Swype has been gaining momentum for a few reasons. First, in several online videos, including side-by-side comparison with the iPhone (see below) Swype appears to be faster. And secondly, the first mobile handset, the Samsung Omnia II, to use Swype will be released next week.