I’ve been following the avalanche of all things Android for the past few weeks. While I’m still on the fence myself, I do know two things: Motorola Droid is not an iPhone killer (what’s needed is an iTunes killer, folks) and that Palm is going down in flames… again. But I have a suggestion or two if you read on.

Poor Palm. They’re the perennial underdog of mobile computing. It’s often easy to forget that with the Palm Pilot they invented the first mobile handheld organizer with commercial viability (unlike Apple’s Newton). The Treo was a remarkable touchscreen phone that sold well. And more recently, the Phoenix rose with the well-received Palm Pre phone running the also loved Palm WebOS.

However, this strategy can not work, will not work. The reason? Palm does not have enough resources (money!) to compete in both hardware and software. At no time has this become more obvious than the past few weeks with the massive onslaught of Google’s attack on mobile OS in the form of Android for smartphones. And, by the way, this is not a Droid vs. iPhone thing. This is a Google vs. everyone else thing. Don’t forget Android is open. Meaning multiple companies manufacturing phones, licensing Android. 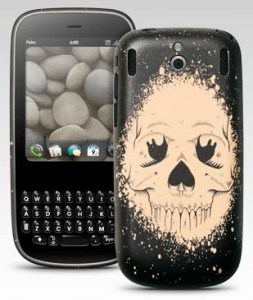 Palm is close to becoming an also ran, despite their finesse for elegant software user interfaces (witness the playing card finger swiping ballroom dance that is Palm Pre). The Pre has question build quality, however, and one may ask what the heck are they doing in the low margin, un-winnable hardware business anyways? The future, and present of course, is in software, software, software. Yes, license and you shall reap mucho money.

That’s it. I know everyone will wonder how that can be a long-term, viable business strategy. After all, isn’t manufacturing the hardware and software for a smartphone a great business? No. It’s not. It’s a great way to lose. I guarantee if nothing changes, Palm will burn through its cash, and be destitute, once again looking for a buyer or declaring bankruptcy in a matter of months.

Riding Google’s massive coat tails is a nice way to stay in the game. Licensing a wrapper for Android, additional applications, and widgets, while sounding somewhat lightweight at first blush, makes more sense when you consider the profit margins.

In a way, Palm could be the HTC of user interfaces for all other Android devices. They could partner with Motorola, Samsung for instance.

Okay, so a little out there, but I’m really just suggesting that Palm radically re-think their strategy and long-term viability.

So far, though, it appears the company is content to merely re-image the Palm movie we’ve painfully seen at least twice before.