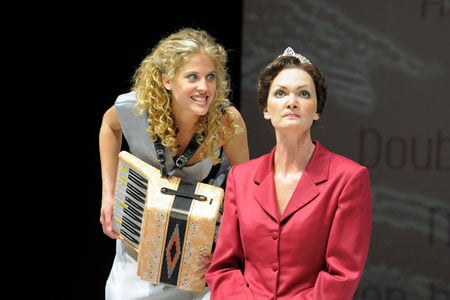 Tony Kushner’s mantel is a crowded place—a Pulitzer Prize, two Tony Awards, three Obies, a Golden Globe, an Emmy and the LAMBDA Literary Award for Drama—and he shows why in the Berkeley Repertory Theatre’s reunion production of Tiny Kushner. Tony Taccone, a long-time friend and collaborator, and also artistic director at the Rep, directs the short scripts, a collection of five one-acts.

The inverse of the smash hit American Idiot (but perhaps similar in spirit), Kushner demonstrates his legendary ability to capture the psyche of the American zeitgeist with a ballet of imaginative dialog.

When the Queen of Albania pulls up in a red Mercedes convertible (a gift from Hitler) on the moon to meet cult entertainer Lucia Pamela in “Flip Flop Fly!”, or purgatory, we know we’re in for something marvelously different.

Although the plays were written at different times, with diverse, impossibly interesting character intersections, the thread of politics, morality and, as Laura Bush discovers, humanity, bind the narrative. Kushner’s humor, at times cynical and biting, reminds us of a darker reality that exists below the surface.

There is some first rate acting in Tiny Kushner. Riveting, a better descriptor. Especially from Kate Eifrig. In the final play of the evening, as former first lady, she delivers a memorable, spell-binding performance as she talks (and reads her favorite Russian novel) to three dead children dressed only in pajamas.

Jim Lichtscheidl, too, is eminently watchable. In the conveniently named play, “East Coast Ode to Howard Jarvis: a little teleplay in tiny monologues,” he jumps from character to character, all the while narrating, in a one-man Rikers Island-based expose on tax evasion. Just remember: 98. All you need to know.

If there is one challenge in the production, it’s keeping the rhythm. There are hits here (my scorecard: #1, #3 and #5) among—not misses—rather less satisfying results in the mix. Kushner feels at home in therapy sessions; many, extended therapy sessions (with Sopranos references a welcome bonus). The scenes wear on maybe a tad long, but the dialog: never so calculating, observational has a schizophrenic lent itself to our collective, inner dialog. A tennis match of ambivalent proportions!

Tiny Kushner requires mental investment. A night out with the boys, this is not. For those willing, it provides a unique lens into the mind of a brilliant playwright.

It’s the kind of play that smiles, then drills into your brain and inner conscious with delightful glee; re-wiring your perspective of life and the world is only icing on the cake.