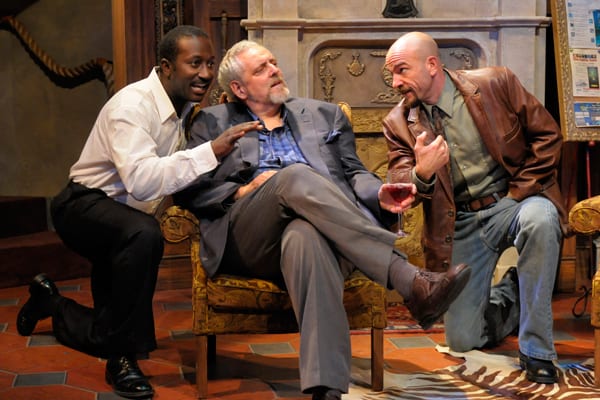 We all have dreams. But at what cost to score a “jackpot”?

The bell tolls—forewarning atonement, compensation for past injustices, intentional or otherwise.

And, after the fogs lifts in ‘Groundswell’, the terrifically tense new production that opened last night at the San Jose Repertory Theatre, we are left with a heightened sensitivity to race, oppression and family. If not with a dash of deception and survival instinct.

Set in a tiny coastal town on the jagged edge of west South Africa, the story begins with Thami (Dwight Huntsman), the manager of a guest lodge, writing home to his wife. Pride influences the tone of his letter, telling of “diamond concessions” and success not yet realized. His co-worker, the firecracker, diamond-diving Johan (Scott Coopwood) has a plan he tells the initially reluctant Thami. If only they could find an investor.

“I thought there was a bloody golf course!”

With the nearest police station miles away and beset on one side by the sea and the other a desert, Thami and Johan hatch their plan, attempting to persuade Smith with ample wine and bourbon to join in a partnership.

What follows next is magnetic, pulse pounding, stage drama of the highest form. Raw, frenetic.

The layers begin to unravel, and we learn each character’s back story. Who bears the largest burden to South African society for the sins of Apartheid? And how will it be measured and enforced? In ‘Groundswell’, a judge does not rule on these matters.

As the evening progresses, in real time, the tension ebbs and flows. Dogs bark in the distance. Welcome relief occasionally arrives when a door opens, and a fresh sea breeze wafts across the cozy lodge. At sea, the bell still tolls. A storm is coming.

“No stories about peeing in your wetsuit!”

The cast is excellent. Scott Coopwood sets the stage ablaze with a high voltage performance. The word unhinged comes to mind. And intensity. His knife work is like a poetic dance: he woos, then cajols, then threatens, then laments, then subsides.

Peter Van Norden lends a noble air before, then, too, unleashing his simmering anger. Dwight Huntsman, the youngest and least experienced of the three actors, delivers a fine performance as Thami. His smile and hospitable nature come easy. From the jubilation of teaching his friend Johan a South African tribal dance, to revealing his inner dreams, we learn, once again, things aren’t what they always appear to be. The wounds of Apartheid run deep.

And under the oppression of the silent fog
The tolling bell
Measures time not our time, rung by the unhurried
Ground swell – T.S. Elliott

Director Kirsten Brandt maximizes each of the performer’s potential, and liberally uses the expanse and depth of the stage. She adds wonderful, nuanced poetic moments to the proceedings that effectively balance the intense, weighty subject matter.

A transforming society can be seductive. But it can also expose inner demons as conflicted will and hope mix amongst the backdrop of oppression that possibly re-invents itself under new names and guises.

‘Groundswell’ is a must-see event. A first rate production that challenges us, emotes us, entertains us. It’s the kind of theatre I soak up, savoring every morsel. Definitely, a jackpot.