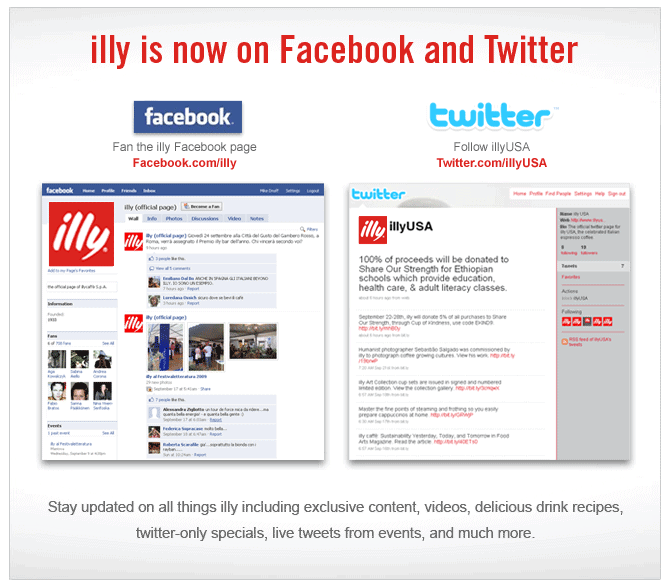 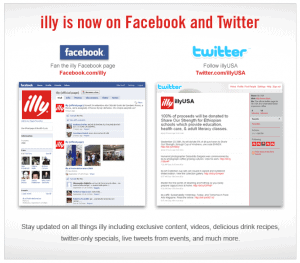 If I guessed right, a lot of readers here like espresso. And wine of course. But that’s evening wear mostly. This morning I received an email from Illy, of “all things espresso and red and white.” They make some decent grinds. Pricey, but there are some machine package deals to be had.

The news in the email announced that Illy was finally joining the social media club, and now had accounts on the two darlings: Twitter and Facebook—a friendship born of Midnight Cowboy proportions.

So, yes that is all I have this morning. No rambling tech stuff. Just to say, that if you like espresso check out their Tweets and FB fan page to get the latest… although I really can’t say if they’ll have anything decent to talk about. Give me a few weeks on that.

If you start receiving a non-stop stream of marketing blather, just un-follow. If not, maybe you’ve found a new BFF and drink recipe.

(Note: one thing I don’t understand actually… Illy’s Facebook and Twitter updates date back several months now. But the email announced the news as if it’s new today. Kind of odd. Maybe a re-launch? It’s like Apple saying they have a great new product, iPhone, just announced this month, in time for holidays… you should get one. Speaking of mobile, stay tuned for some posts I’ll try to get out on Google Android handsets. The market is exploding with all kinds of goodies! Ciao)