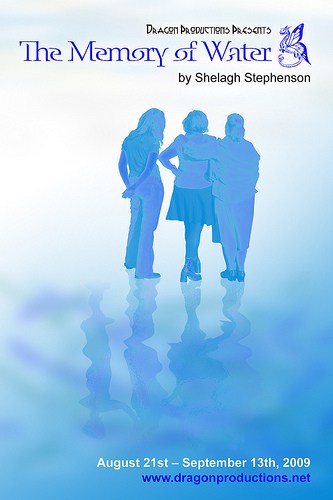 The Memory of Water

You owe it to yourself and the arts community at large to seek out these wonderful, tiny, non-profit regional theater houses, like the Dragon Theatre in downtown Palo Alto. Tucked inside a store front across from the Caltrain, you’d almost mistake it for a craft store if it weren’t for the lit sandwich board out front.

Case in point, Dragon’s latest production, ‘The Memory of Water’, fills the intimate 45-seat theatre’s air with emotion, occasional laughs and plenty of weed.The story is straight forward: three sisters are dealing with the death of their mother. How each copes is a study in character more than plot.

One sister, Theresa (Laura Jane Bailey), is fastidious and proper using an electronic organizer to stay on top of things—at least at first, until she hits the bottle hard later with reckless abandon as family secrets come tumbling down. Catherine (Janine Evans) is a shopaholic with a penchant for chemicals including copious amounts of booze and joints. And finally, Mary (played by artistic director Meredith Hagedorn) appears to be the most normal of all. Although she likes wearing Ray-Bans in bed and holds perhaps the biggest family bomb of all. But, she doesn’t know it.

From time-to-time, the ghost of mother Vi (Lessa Bouchard) makes an appearance, basking in the reflections of water; dancing, questioning her daughter’s love, and stirring up a brouhaha.

The men, cheating boyfriend Mike (Patrick Borella) and globetrotting salesman Frank (Noel Wood) are primarily relegated to the background. Timid and constantly apologizing one moment,  the next trying to figure out why they’re involved with these crazy women.

The story takes place entirely in the mother’s bedroom (in a house on the north-east coast of England, near Whitby, 1993), which provides for some irony, reminiscing and also an amusing, drunken dress-up party.

The acting is solid, with some fine moments. Janine Evans chews up several scenes with her wild sister bit, “Broke doesn’t mean you can’ buy things!”

Laura Jane Bailey does well to portray a woman, usually in control, spiraling downward. Bottle in hand, she takes swigs in between well delivered lines of hysteria and escalating incomprehension.

The first act was slow and could have used a spice of conflict, mystery or both. To me, it too often looked like what it was: a bunch of sisters whining, kibitzing and talking about mundane daily stuff. The second act is a breath of fresh air. The play comes to life with some sharp scenes and lots of emotion. 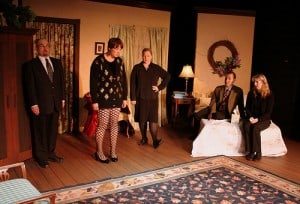 ‘The Memory of Water’ is a slice of life, an important moment in time, that sees three sisters come to terms with mortality, relationships and, for some reason that I can’t still figure out, water (I know… memory, right?). Judging by the audience, this will appeal to mostly women (which would explain why Loni enjoyed it more than me).

On this evening, though, I was a happy minority enjoying live theater, tucked away in downtown Palo Alto. For $20, great entertainment value.