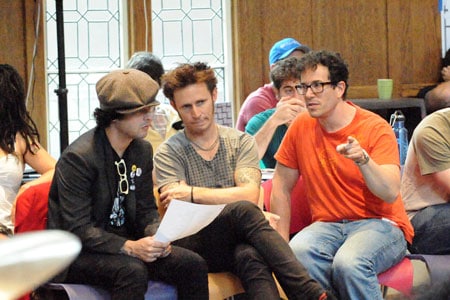 The weekend is almost here, and that means more wine adventure and more theatrical spectacle. How appropriate. They go so well together.

Loni plans to keep the selection process going for the Loreto calendar too, so there should be more exciting news on that.

Harvest is here in wine country—despite the impending heat wave sweeping across the Bay Area. That means flying grapes. Stomping. And stained clothing.

Hopefully we’ll catch some of it on Wine Tube TV. It’s been a secret dream of mine to dump Loni into a vat of grape juice.

This event has all kinds of crazy names. A harbinger of things to come I’m sure. The winery must have some creative marketing folks. We’ll find out when we head up to Sonoma for a crush spectacular.

The Last Days of Judas Iscariot

The opening gala for City Light’s new season is Saturday night downtown San Jose. Set “somewhere between heaven and hell”, Iscariot is a dark comedy we’re looking forward to seeing. The intimate setting adds excitement and edge to the performance. You’re literally feet away from the actors. If you haven’t experience this kind of theater, I highly recommend you give it a try.

Everyone’s talking about it. The musical by Bay Area band Green Day is apparently oversold (although, why then can they release tickets continually via Facebook?) and draws seemingly never ending headlines. Early reviews are mixed, at least according to the two locals I’ve seen. Karen D’Souza of the SJ Merc calls it a “white-hot debut,” while Oakland Tribune’s Jim Harrington writes, “there’s no reason to see “American Idiot” on stage when you could listen to the album instead.” We’ll see first-hand if the fuss, good or bad, is warranted. And, also, to weigh in on the big question: Broadway?

On Driving, we have Nav (finally)!

As much as I love Google Maps, I appreciate the convenience of in-car nav.

Now, long overdue, we have a tiny Magellan unit that works great (I should write a review here someday, $99 Costco). Now we can zip from winery to winery across Sonoma, Napa and Livermore, and make our way across Bay Area theater houses with lower blood pressures.

While Loni sleeps, at least now I have the soothing, text-to-speech, voice of my new Nav companion. And now Ms. Magellan takes all the blame when we find ourselves on a slight detour, off the beaten track, headed through the hills somewhere towards Vegas, or Bodega, or Ashland…

I’m so impressed by the Loreto Bay home owner community. Nice effort to pull together whatever we can to help the area.