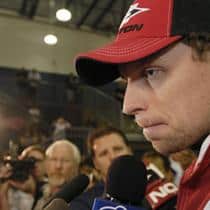 Kind of like the Sharks’ finish to the ’08/09 season, lots of talk and expectations, but ultimately resulting in a rubber chicken of a first round exit. Or something like that.

In the locker room at the San Jose Ice, I’ve been talking about this with teammates on my adult league team for days. Despite the media antics, it seemed like a done deal for a while.

On paper, it looks like a win for both teams. Heatley was fed up in Ottawa, and the media grilled him daily (“whiner”). Meanwhile in San Jose, the Cheechoo train has faded in recent years, although his heart and soul still seem intact… the guy tries! But it’s hard to imagine he led the league in scoring just a few years back.

In the end though, I’m scoring this one in San Jose’s favor.

At 29, Heatly is a formidable offensive weapon. A potential star, with some unfortunate mis-steps, and off-ice tragedy.

In 2003, he plowed his Ferrari into an iron fence in residential Atlanta killing his passenger teammate, NHL player and friend Dan Snyder. It’s a heart wrenching story. Still, Snyder’s family was overwhelmingly supportive of Heatley. In addition to three years probation, he was ordered to deliver 150 speeches on the dangers of speeding.

I never thought Heatley’s career would rebound after that.

But I was wrong.

In Ottawa, he became the perfect sniper on a talented line with Spezza and Alfredsson.

It dominated, big time, especially in regular season games. But, like a lot of things us Shark’s fans know, it soured when the playoff runs ended far sooner then they shoud have. In many ways, Ottawa and San Jose share much in common: so much talent, so little playoff success.

I just hope the San Jose Sharks don’t inherit too much from their northerly NFL neighbor, the Oakland Raiders. Famous for embracing cast offs, like Randy Moss, who carry baggage and usually me-too attitudes that suit owner Al Davis (but not fans or the W column), the Raiders are not exactly a role model sports franchise.

Heatley has tremendous talent, and should fit well in San Jose. Then again, talent has never been the issue here.