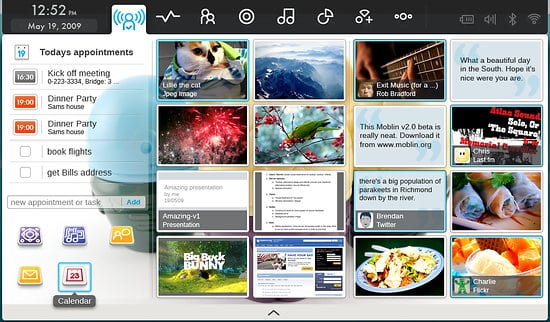 At least it’s here in beta form. Moblin is a slimmed down operating system designed for Netbooks. It has a nice glossy, Web 2.0 look to it. Dig deeper though and you’ll discover a few things.

First, it’s actually based on Linux—the OS most likely to live in a garage with Coors-guzzling neighbors and hippies tinkering on its inner workings. Maybe that explains why it’s free too!

A little surprise, at least according to Gizmodo: Dell is the first mainstream manufacturer to ship a netbook, the Dell 10V Mini for $299, with Moblin installed. However, I still can’t find it listed on their web site.

Apparently the OS will also run well on some smart phones and nettops. Essentially, any low powered device could be a good candidate. Of course, you won’t be able to run any Windows applications on it. I suspect most potential users will be cloud-happy, Tweeting types.

Moblin looks interesting. It has some sex appeal which Linux has in short supply and needs desperately to make any sort of impact on the consumer market.

Stay tuned, I plan to give it a go in a few days and report back. Meantime, you can download it too here. Tell them I sent you and they’ll give it to you free.