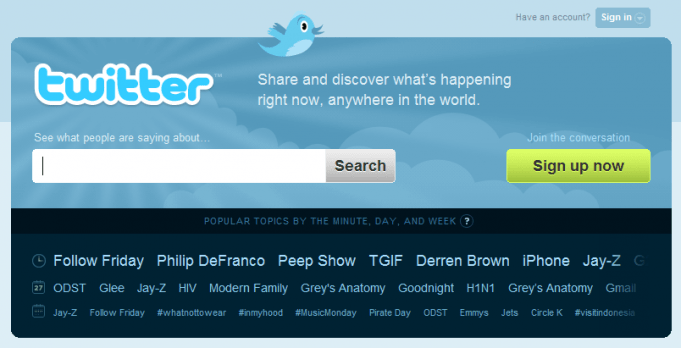 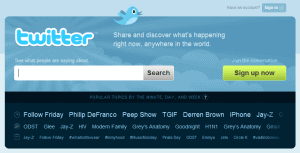 Who knew? Maybe if Twitter had doubled its notorious, infamous, and entertaining 140-character Tweet limit, it would now be worth $2B. Instead, alas, it must settle for a mere $1B valuation.

The Wall Street Journal also reported on the deal citing user estimates for Twitter at 25 million (end of 2009 estimate), and for its still monstrous competitor Facebook, at 300 million.

Still, Twitter makes $0. Zero. But, as the theory goes, bring in the users, and figure out the monetization later. No doubt it will have something to do with advertising.

1. Advertising – sure, Twitter has a lot of buzz, but it’s still only attracting early adopters (and plenty of spam happy types). Now it needs to jump into mainstream. To do that it must reach out to these non-Tweet heads, explain the value or entertainment proposition, and get new users signed up, el pronto. Otherwise, they will continue to go to (or stay on) Facebook, which continues to add more Twitter-like capability by the day (e.g. the recent addition of @ use in status updates to include friends).

2. Figuring out how to make money – yes, you could say it takes money to figure out how to make money. Why? Because any strategic choices here will require technology. Think about Google AdSense and AdWords. They started on a knapkin, but required a lot of hard work; coding and roll-up-the-sleeves sweat and tears innovation. And, not to mention, business development. Twitter too can’t go it alone. It must partner.

3. Hiring talent – Twitter can’t be a garage-like start-up forever. When you have 25+M users, at some point you need to get serious about support, new features, user services, APIs. Until now, Twitter has been light on all four counts. That can’t continue if it wants to take it to the next level.