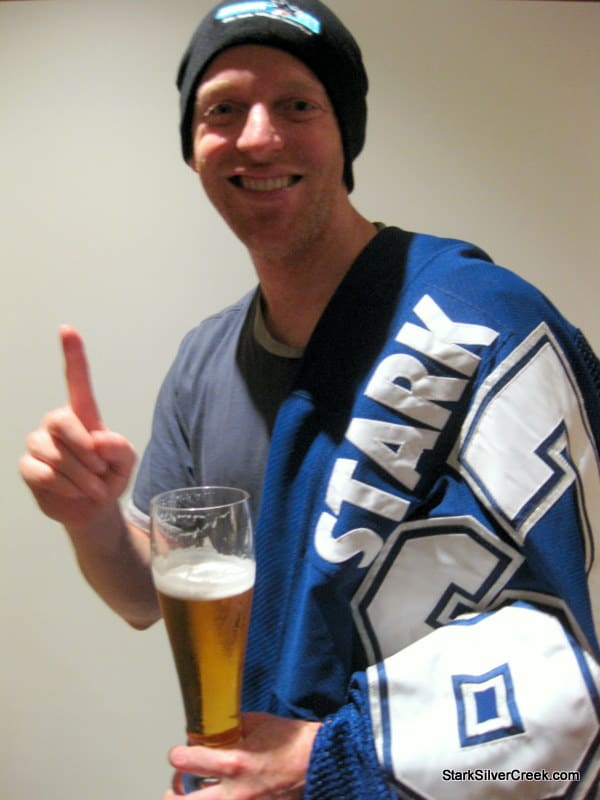 It was 1999 since I last won an ice hockey championship (with Cisco) here in San Jose.

Tonight, that finally all changed, as we won our championship game at the downtown Logitech Ice 5-1 in a fairly one-sided affair. I think our semis were tougher. Great action and a big crowd, by our beer league standards.

I had a below average points season (but played much better in the playoffs, with 7A in 3 games), but how sweet is it to wear a championship… skullcap?!

Especially for this aging Canadian player. It’s invigorating to be on the ice though with some of the San Jose State guys.

I laugh to myself when I hear teammates complain about hitting “25” (!), or references to “old timers” in their 30s. I was born in the 60s. Came out of Ottawa when guys like Steve Yzerman were being drafted in 1983.

Not that I was anything close to the Detroit legend, or even my high school lunch-hour teammate Mike Eastwood (“Easty”, born same year as me) who went on to have a decent career with Toronto, Winnipeg (yes, he’s an old timer too), and several other teams. But he had size. Well actually come to think of it , he was kind of slow and I always outscored him, and was “picked” ahead—at least that’s the way I remember it at good old Ridgemont High School.

But in the end, I had my clarinet. See, while other guys were off to hockey practice in minivans on those chilly -40C Ottawa mornings—their Dads socializing at the local Tim Hortons with plenty of Timbits—I was off to clarinet practice. It was the classic fork in the road. Yes, I would be a future Benny Goodman!

I’m amazed at the quality of ice hockey here in San Jose. Today was in the 90s (F). And yet, there we were chugging away on semi-wet ice in the first period. Chasing our Al Bundy moment.

I have a chance to do it all over again tomorrow, with another team. Yes, 2 championship games in 2 nights. When it rains, it pours.

And tomorrow is going to be one of those crazy SSC days that Loni and I relish—something about type ‘A’. In fact the whole weekend is packed. Tomorrow we’ll celebrate my nephew Gerrit’s 12th birthday (pic here, what a cool dude!).

Then we’re off to downtown San Jose for my shot at a 2nd championship with Team Voodoo (sponsored by Voodoo Lounge downtown San Jose). As soon as that game ends, we’ll scoot off to Mountain View for a champagne opening night for Yellow Face at TheatreWorks. Hopefully we’ll meet the cast later including Francis Jue who Loni interviewed earlier.

PS – Before our hockey game in the locker room all the older guys were talking about ideal nap times. Some said 25 minutes. Others liked a longer one, around 45 minutes. For me though it’s 20 minutes. Yes, just like Einstein. Although that’s where our similarities end unfortunately. Also, fruit & yogurt before a game; beer after (key: not before, like some guys) the hopeful win.

Quiz: my #67 (sadly in TO Maple Leafs blue and white) has at least 3 significant meanings… can you guess what they are?