Bay Area theater fans will be excited to know that our very own Francis Jue will be back on stage here at this week’s opening of ‘Yellow Face’ at TheatreWorks in Mountain View.

The sixth of nine children born to

an Asian-American San Francisco family, Francis has been on quite a roll. Enjoying success on Broadway (Thoroughly Modern Millie, Pacific Overtures) and also in Off-Broadway shows (Coraline).

Last year, he received critical acclaim and several awards, including an Obie and Lucie Lortel award, for his work in the New York production of ‘Yellow Face.’ This week, the very same play opens Saturday, August 29th at TheatreWorks in Mountain View.

Loni caught up with Francis today to talk about growing up in a large family (their own baseball team!), the TheatreWorks production, his take on trends in Theatre, differences in Television and stage work, and some of the clever messages and humor behind ‘Yellow Face’ and its creator, David Henry Hwang. 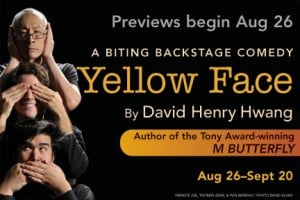 WHERE: Mountain View Center for the Performing Arts
500 Castro St. (at Mercy)