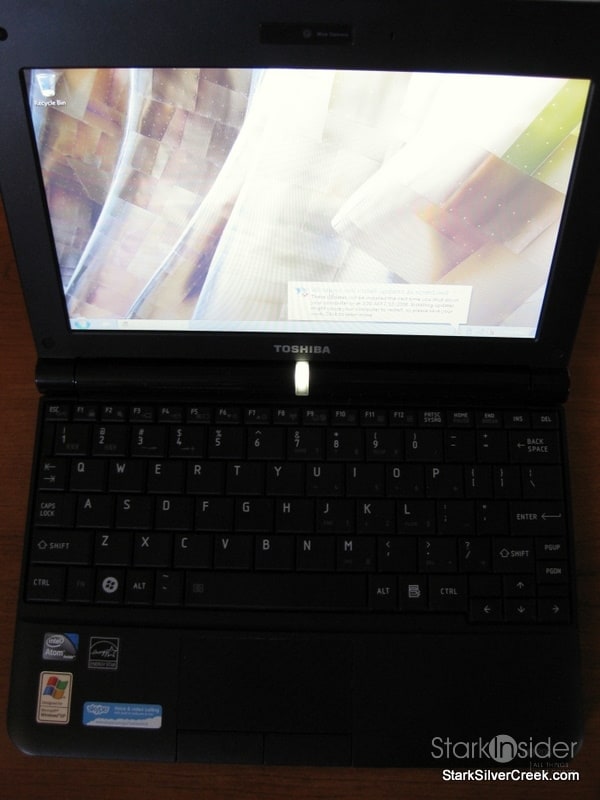 As the Brits would say, this is a splendid piece of kit. It took Toshiba a while (but not as long as Apple…) to enter the netbook market, but it was worth the wait.

First off though, all netbook rules apply here, do not expect to run intense applications. No modern games. No Photoshop. The Atom N280 processor can’t give you the juice for that. Save the heavy lifting for your more powerful desktop or full-time laptop.

But this Toshiba can pull off just about anything else with petite aplomb, including surfing the web, checking email, tweeting, socializing even, or should I say social networking.

The model I tested is called the NB205-210 and it retails for $349 (Costco carries it). It comes with a standard list of netbook specs including a 10.1″ glossy screen running at 1024 x 600, 1GB RAM, 160GB hard drive, aforementioned energy-efficient Intel Atom processor, 6-cell battery, wireless, and a keyboard that I’d say is around 92% standard size. All of this in a device weighing less than 3 pounds.

What really sets it apart is the battery life. Stellar! It’s nice not to see the battery gauge in Windows slowly drain as you stare at it. Some reviews I’ve read had it go over 9 hours. I was regularly getting closer to 6-7 hours while using the wireless, surfing and at about 75% brightness. That is class leading, and possibly the best out on the market right now. It should be good enough to take you through the work day or a short trip.

The keyboard is good, although the premium 311 model ($49 more) comes with a better chiclet island style keyboard (along with bluetooth, metallic construction, and premium aesthetics). I was quickly able to get up to speed, though fell just short of my normal typing accuracy. There are a few compromises. The tilde key is moved next to the spacebar, which may not sound significant, but it threw off my touch typing slightly because of the shift in key locations. Also, the right shift key is truncated to allow space for handy, dedicated page up and page down keys. This trade off provides scrolling convenience at the expense of typing accuracy, at least in my tests.

The trackpad is a plus. It’s large and responsive. Two buttons below are tactile and easy to hit when navigating. Although I’d say they tend to be too “clacky” at times. In a quiet room, others will might mistake you for a modern-day woodpecker.

Performance-wise, the Toshiba netbook is solid. It runs slightly warm underneath, but less than average. The fan occasionally spools up for a moment or two, but you’d be hard-pressed to hear it anywhere but a quiet room. It ships with XP, but even Windows 7 ran smoothly, and scored an index of 2.2, which is on par with other Atom-based netbooks.

Over the few days I was testing it, some design nitpicks emerged. The power light, based in the middle of the hinge below the screen, glows a bright white. So much that you can use it in the dark to help see the keyboard. Unfortunately, most of the time it is distracting. Carrying the laptop is comfortable—tidy and compact—except the battery tends to wiggle. For some reason, it doesn’t lock-in rock solid. So that bothered me. I devised a workaround using a piece of post-it note as a wedge, and that did the trick.

These are all minor criticisms though for a well-built and stylish netbook, that goes forever on one charge. At $349, I’m amazed at how far these netbooks have come.  If you’re in the market for a carry-along, this might be the perfect companion for your next Starbucks trip. Recommended.