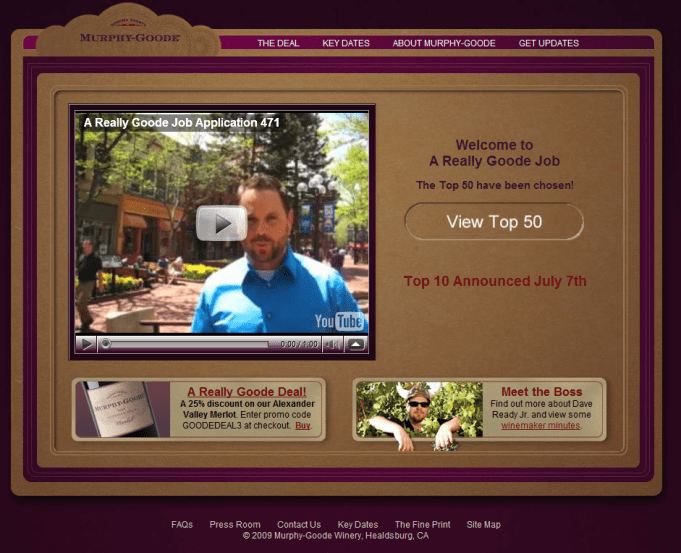 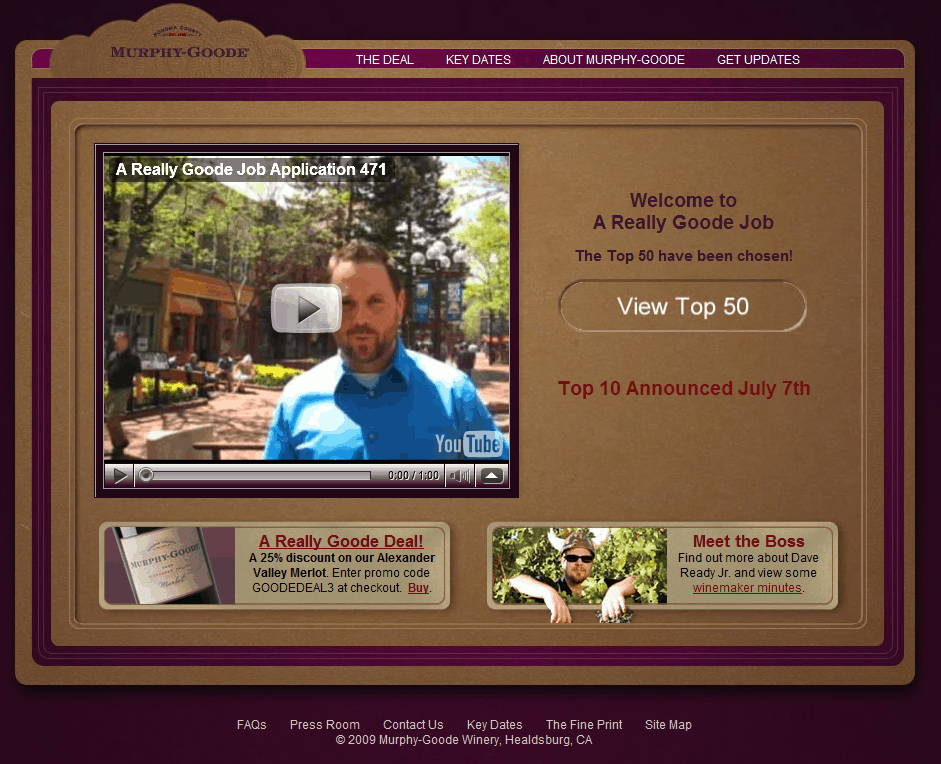 By now, everyone — and I mean everyone — has heard about the infamous Murphy Goode blogger contest. And just in case you haven’t, the deal is a 6 month job (“A really goode job”) paying $10K/mo, blogging for the Sonoma County winery.

The contest has garnered plenty of headlines, and, thanks to exposure on network TV and major media outlets across the land, has already handily surpassed any marketing objectives the Goode team had established for this novel idea.

At stake is also a larger issue: social media and the wine industry. How does the new world of Twitter and Facebook play into next generation marketing plans? Some wineries have already ventured full-tilt into the space, having established Facebook pages and regular Twitter updates. But for most, it’s like dipping a baby toe into a giant lake of the unknown.

So, speaking about social media, about this Murphy Goode contest…

Applicants were asked to send in a 60 second audition clip via YouTube. The Top 50 (out of 2,000 contestants) was announced a few days back. I scanned across most, and would say the results are decidedly mixed. While some are slick (too slick, really, for the world of wine and blogging — they really would be more at home in a film festival for shorts), others are either too boring, non-educational or both. And that, in my view, is the death knell.

I either watch wine videos for one of two reasons: either to learn something (WSJ, WS), or to be entertained (Gary Vaynerchuk – although I find some of his episodes also informative). If you can’t achieve at least one of these goals, then what’s the point? Well, I suppose, nudity and looks could play a part as a last resort… wine, of course, becomes a prop at this point…

So here’s some of the best, and the worst of what I’ve seen so far. And to be fair, I can appreciate everyone making an effort to “put themselves out there” for all us armchair quarterbacks to criticize. But, hey, it is voluntary. The field will be narrowed to 10 by July 7.

Also, does this format portend the future of reality TV?

Sheer Brilliance (and contracted for life to Stark Insider!)