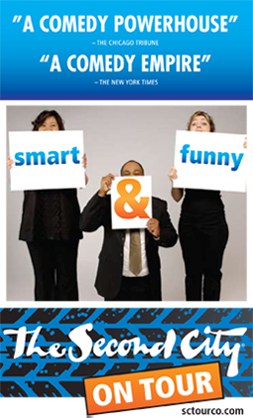 The Second City - On Tour

(UPDATE: View the after-party interview with the entire cast of the show!)

In the mood for some side splitting (even tear inducing!) traditional improv and sketch comedy?

Then hurry over to The San Jose Repertory Theatre for ‘The Second City – On Tour’ limited engagement. It’s only here until Sunday. The show bills itself as “smart & funny”, and it uproariously lives up to the promise.

This traveling show is the equivalent of a live, regional Saturday Night Live, but without all the non-funny bits.

For almost two hours, six actors (accompanied by musical director Chuck Malone) deliver a steady diet of laughs, guffaws, bellyaches and even a few delicious groans to boot. The material is fresh. And the actors dive in head first, with plenty of gusto that helps them power through even the toughest of improv situations (e.g. Cat Wrestler, Kids Suck, Apple, on this particular night).

On more than one occasion I found myself laughing to tears.

I grew up with SCTV (Toronto) in the 1980s which was one of the original star-powered improv shows that produced comic megastars like John Candy, Rick Moranis, Martin Short (Ed Grimley: oh give me a break I musy say!), Catherine O’Harris, Andrea Martin… and the list goes on.

Spontaneity combined with quick whits can produce moments of timeless comic genius. Chicago’s Second City of course produced industry legends such as John Belushi, Chris Farley and, recently, Stephen Colbert and Tina Fey. While this show may not quite reach those upper echelons, it sure does come close. The pedigree is there.

The show interweaves fixed sketches with improvisational exercises. The latter produce the most ups and downs of the evening, perhaps making them more rivetting and watchable. There is something energizing about watching an actor think on their feet. Even when some bits fall flat, it’s hard not to smile because of the commitment and relentless display of skill, cleverness and timing.

Most of the skits are right on the mark. I could only think of one that I might adjust or remove alltogether.

A couple of standouts still have me smirking a day later. A scene with nuns, an old phonograph player and a priest trying to find an appropriate record to play for a celebration was brilliant. Here, we see the impact of what might be said (or sung), but is not. The audience’s imagination is left to fill in the blanks, much to the priest’s concern.

Another successful sketch captures the frustration of getting an oil change, only to discover the car needs $900 of unexpected repair for a flaxipacitor (which connects to the rotostumper… or something like that), all so you can “brake in the rain”, or “merge”. The physical demonstrations in this bit: waaay funny.

There are so many more, that as I review my notes, I realize this show had an abnormally high rate of laughs.

Palin is given a new twist with howling results. There is a mannered, stand-up comedy routine by Emily Bronte. NASCAR serves as a backdrop to an in-depth analysis of the Middle East by two drinking buddies. And we even witness a car wreck of a spelling bee that reminded me of the (funny) show held at the Rep just months earlier.

Social media is a deserved target too with several references to Facebook, Evite, Flickr, YouTube and, of course, Twitter (used in conjunction with a choice word that rhymes). All this material served to demonstrate this troupe is in touch, hip and contemporary. But the show never crosses the line of bad taste, which only served to heighten the impact of the laughs.

Bottom line: ‘The Second City – on Tour’ is better than watching Saturday Night Live. Fresh. Clever entertainment. Served up by pros with unabashed abandon, skilled timing, and … an apple.