If I’ve learned one thing in my years it’s not to bet against Apple. Ever (well, except when Gil Amelio is running the company).

But still, sometimes I wonder what has taken Apple so long to introduce a netbook.

The gap is screamingly large in their current product line-up. The smallest Macbook is 13″ and the largest handheld device, the iPhone, measures in at 3.5″. That’s almost 10″ of wiggle… errr, I mean multi-gesture room. And, given Apple’s notorious reputation for love of all things profit margin, you’d think they’d pounce on that 10″ sweet spot of potentially juicy sales, rife for pillaging… iTunes style.

According to the Financial Times, that day is arriving soon.

However, I’m not sure, assuming this rumor is true, that Apple has the perfect prescription. According to the article’s description of the new device to be launched sometime in September or October, here’s my take. 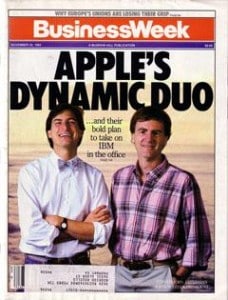 Part of me wonders if Apple is haunted by the ghosts of another former CEO, visionary John Sculley, who’s Newton revolutionized the world—albeit 15 years too early.

Then again, I can’t wait to get my hands on one of these devices, and I bet I’m not the only one.