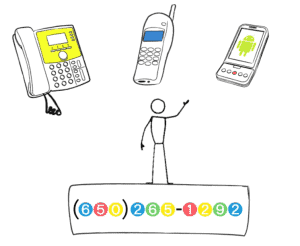 Hey Google, where’s my invite?! Yet again, following in the footsteps of Apple and Nintendo’s get-in-line marketing jujitsu, Google’s new Voice service is available “by invite only”.

We’ve seen this movie before, with Gmail. And it works well. Like a roped-off club entrance with snaking lines, people tend to gravitate towards crowds and that what they can not attain easily.

What is Google Voice?

It’s one phone number that follows you. Unlike traditional phone numbers, it is not attached to a specific device.

Instead people will call the number, and it will in turn ring your cell, home and/or work lines automatically. According to the information on google.com/googlevoice, you’ll also be able to choose forwarding based on the person calling. For example, you’ll want people related to your work life reaching you at the office and on your cell phone. Family, though, could be set to reach you on all (except in-laws, of course).

Like other Google services, there should be plenty of gee-whiz, cool extras. One is automatic transcripts for voicemails. Another appears to be the solid integration between Google Voice and Gmail which treats your phone calls as another inbox item.

Will it be worth the wait?

My guess: yes. It will be good. And it will be very popular. Google likes to under-promise and over-deliver. That’s a good thing, and a refreshing change from the past when a lot of bluster and hype resulted in much despised vapor-ware.

From the Google Voice help page, “all the features are free, except for calls outside the continental United States, which you’ll be able to make through Google Voice at an affordable price.”

With iPhone, Apple is a major player in the telecommunications industry. With Android, Google already has one foot in the door, and Voice gives it a chance to be a full-blown force (or at least perceived as such), much to the chagrin of graying telecos everywhere.

Who would’ve thought that Apple and Google could have such impact on the next generation of consumer communications?