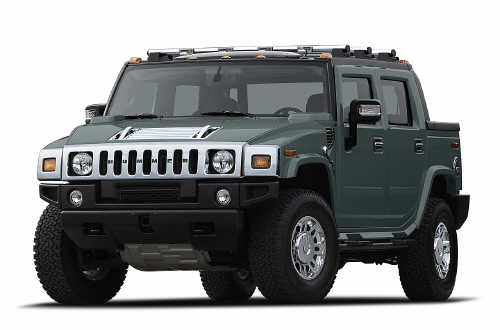 There are just too many tasteless, off-color comments I can make about a Chinese company buying the hemmoraging Hummer brand (sales down 62% in Q1) from General Motors. I’m guessing most mainstream publications, with storied reputations, like the NY Times and WSJ, would not go near them. But not me!

So how many Chinese people can you fit in a Hummer?

There should be a dangerous swerving driver alert system — bad driver in white Honda Accord? Yellow. Disoriented person in over-sized Chinese Hummer? Red.

Seriously, though. I’m being facetious here. Who knew the bailout would continue, this time sponsored by overseas Governments?

Maybe we should blame Arnold Schwarzenegger. According to one story, when he was filming the movie “Kindergarten Cop” in Oregon in 1990, he saw a convoy of 50 Humvees drive by and decided that he had to have a civilian model of the same vehicle, which became the Hummer H1.

This announcement is a harbinger of things to come, and represents more growing pains as the transformational in the structure of the American economy continues to shift to the information age. It also means the buyer, Sichuan Tengzhong Heavy Industrial Machinery Company, based in Chengdu, will become the first Chinese car company to sell cars in North America.

It was only a matter of time.

As the US auto industry collapses, there is a question worth asking. Is it worth saving? It’s a tough pill to swallow, and devastating to small towns, people who will lose jobs, and a multitude of related companies that exist thanks essentially to Motown. But what is the long-term cost to the US government, tax-payers and the overall health of the economy of propping up an industry that is fundamentally not viable — at least in its current incarnation?

Perhaps the best answer is the path President Obama seems to be currently following. That is, to reinvent the industry as a more efficient, niche focused variant of its former itself. Differentiation. Let the Chinese compete on cost. The Japanese on quality. The Germans on engineering. And the Americans? How about, accessible green tech cars for the masses?

Let’s not forget about Lenovo’s 2005 acquisition of IBM’s ThinkPad division for $2B. We can learn a thing or two about China’s fortune in the auto industry. Many expected the Lenovo deal to be a disaster. Indeed, there was short-term pain (many corporate customers bolted), but by all other measures today, it was a success: the stock price had performed consistently with its peers such as HP and Dell, marketshare is strong, and the brand still enjoys global presence.

Side note: is anyone concerned about potential national security sensitivies given the Humvee (in non-civilian form) is a strategic military vehicle?

Will Saab be next up in the G.M. bankruptcy fire sale?

Time to queue up some off-color Swedish jokes.