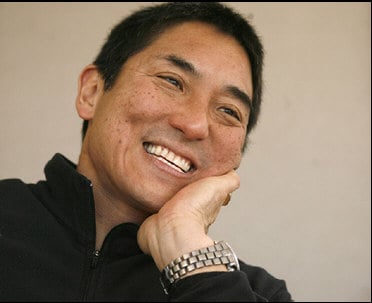 Guy Kawasaki must be a really busy guy, right?

A well known entrepreneur in Silicon Valley, of Garage Technology Ventures, and now as I’m continuously reminded on Twitter, a new web site called Alltop. Turns out it’s pretty interesting. A news aggregation service that allows you to quickly view the latest news, blogs and opinions on a variety of topics. Kind of like a more flexible and powerful Google News.

What’s less interesting though are the non-stop flood of spam-like ‘Tweets’ that threaten to turn Twitter into a real-time spam engine.

Although Guy is far from the worst (and to be fair, transparent about his intent, more on that in a moment), I found it amazing during the last 24 hours, as of this writing, he had fired off over 90 tweets, such as:

7 obscure facts about The Statue Of Liberty. https://adjix.com/ctikAC

Omnipresent! But, hang on a sec. Was I really following Guy Kawasaki… one of the most creative and respected minds when it comes to marketing, branding and venture capital? Based on some of the above examples I was being fed all sorts of trivia, products (fonts?!), and entrepreneurial dating of sorts.

As I scanned his tweets, I did find some meaningful, and interesting information:

How to boost your creativity https://adjix.com/4uuf

I also discovered that, like me, he plays hockey.

Still, this illustrates the increasing challenge of squeezing any sense of productivity (and entertainment) out of Twitter: it’s getting harder to separate the noise from the good stuff.

I’m not suggesting that every tweet needs to be ground-breaking. After all, it’s spontaneous, and it gives you a small window into someones personality, work habits and interests — something not possible without Twitter. In fact, it’s the very combination of quirkiness, breaking news, clever insights and occasional diversion that draws millions of users.

But how was someone as busy as Guy Kawasaki finding the time to compose tweets at all hours, in so many different directions, on so many topics?

I dug a little deeper. And discovered, not surprisingly, the answer: hired help. He has at least two people who tweet on his behalf. You can identify their tweets (still sent under Guy Kawasaki’s name) with their tw0-letter initials at the end of each message, “AC” or “CR”.

To be fair, again, this is common practice, and an unfortunately increasing trend. Just when you think you’re connecting directly with a CEO or celebrity, turns out you’re in fact interacting with an intern or PR firm.

This does not represent the original intent or spirit of Twitter.

It is, in my view, a place to remove degrees of separation, not to increase them. It’s about honest, direct communication that can make you laugh, inspire you, or provide invaluable information, connections and news. Other times, it’s just emotional and whimsical, capturing the good times and bad times, in the moment.

To put Guy Kawasaki at the center is unfair. He’s one example. And there are far worse. And to his credit, he is transparent about having others use Twitter on his behalf (you can find an explanation and even photos of his alter-egos on his “Holy Kaw!” Posterous blog). I still don’t like it. I want to follow Guy Kawasaki on Twitter, not Guy and his 2 trivia-mongering interns (why don’t they just tweet under their own names?).

Promotion and Twitter are natural partners. I really don’t take exception to anyone talking up a service, web site or company. There are many that do it including Guy. Eugene Lee, CEO of Socialtext, does a good job of interweaving plugs for his company, but also sharing useful information on social marketing/networking, B2B software, venture trends, etc. But most importantly they all come directly from him.

Kevin Pollack, the actor, is also the real deal. His tweets, sent from an iPhone, are a mix of interesting, inane and self-promotion, with lots of good laughs mixed in. We recently saw him at Cinequest here in San Jose, and he was very much into the Twitter hype.

There is a solution.

Guy’s suggestion for people who don’t like the alter-ego tweets, or the fact that he promotes Alltop incessantly, is to stop following him. That’s too bad. Instead, I’ll continue to follow him. It’s just extra effort on my part to separate the spam from the useful.  It’s just another interesting twist in this phenomena called Twitter. And I must admit I’m enjoying every second of it — 140 characters at a time.

Given the direct, spontaneous nature of Twitter I decided to take Guy to task on the issue with this tweet:

Okay, I admit it was a little snarky. Buy I hoped my slight smile and sarcasm came through? Maybe not. Either way, he did indeed respond:

Kudos to Guy. I told him I was up to the challenge. I’m not sure how he can prove it’s him. And actually that’s not my issue. I believe it is him. Again, it’s just the noise of his 2 interns added to the mix that frustrates me.

I’m still awaiting to hear what happens next. Stay tuned!

Oh, here’s something Guy Kawasaki just tweeted. At least I think  he did. Either way, it’s a funny skit about celebrities and Twitter.