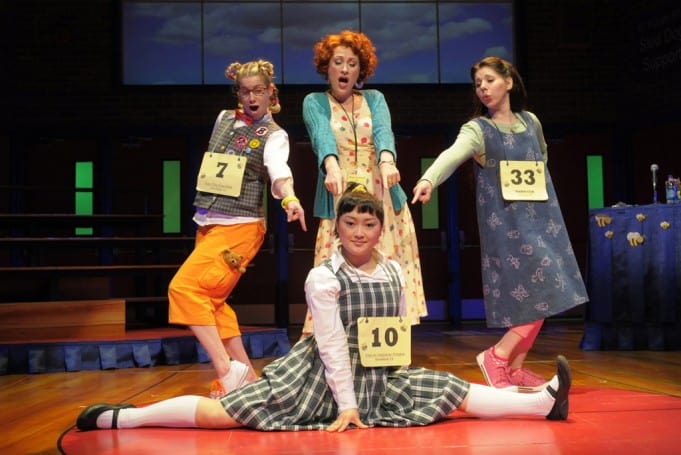 Runner-ups get steak knives in sales contests; all a lonely spelling bee contestant gets when booted out is a juice box. That, and a long walk offstage, back to their disappointed, sullen, ultra-competitive bee parents — the alphabet soup equivalent of epinephrine-chasing hockey moms and dads. Welcome to middle America.

Like beauty contests, regional talent shows, and dog shows (see Best in Show for a great, comedic example), spelling bees reveal an inner world of concupiscence, parental pride (perhaps gone slightly amok) and over-achieving youngsters following their dreams — even if slightly out of the ordinary.

On this opening night, little did we know the show had already started as we made our way to the seats in the now bright, gymnasium (“with a wine bar!”) 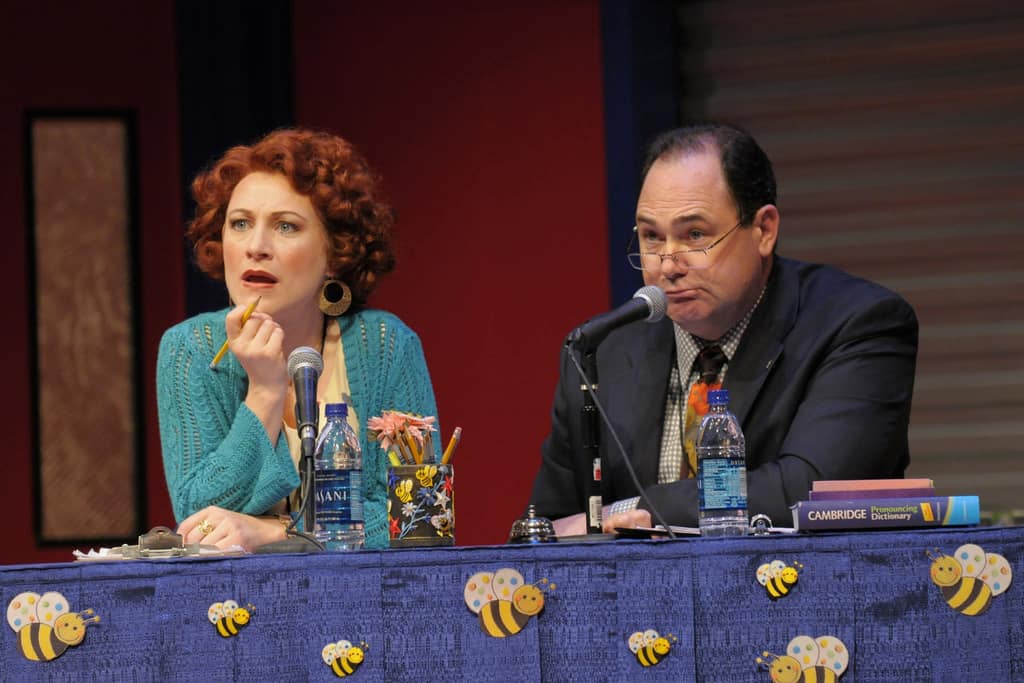 The story is simple. Six adolescent outsiders vie for the ultimate prize, the Spelling Bee title. Otherwise misfits, they find comfort in each others quirkiness and love for lexicon — did you know if you switched the first two vowels in ‘William’ you end up with… ‘William’?

The show starts off strong with sharp pacing as we get to know the vice-principal (after a five year hiatus amid mysterious circumstances, unable to use his former principal title), his perfervid sidekick judge Rona, and the six spelling bee contestants.

There is dancing and singing, “Welcome to the 25th Annual Putnam County Spelling Bee!”, revelations about the students’ upbringing, family life and motivations.

Some of the best material is the hysterical, often vexing, zingers delivered by Steve Irish as he announces the definitions and uses of arcane words, in deadpan form. “Omphaloskepsis”, “Crapaud” (not a great meal!), and a series of obscure, South American rodents. I did not realize, although perhaps obvious on second thought, that Mexican was also slang for any Puerto Rican, Cuban or essentially anyone of Spanish decent.

There is a neat trick used to further engage the audience which I won’t give away here. But it serves to once again make us feel like parents watching an actual Spelling Bee.

This is an entertaining, light-hearted and toe-tapping good show. I found myself smiling often. It was hard to feel anything but purely entertained.

My only criticism would be directed toward the latter half, where some scenes drag and repeat without advancing storyline or characters. With a running time of about 2 hours (and no intermission) you could sense a slight loss of rhythm. It does pick up again though for a strong, pleasing conclusion.

It is an ideal way to end the Rep’s season.

Also, it marks the end of Timothy Near’s highly successful and praised 21-year tenure as Artistic Director of the San Jose Rep. The SJ Mercury’s Karen D’Souza wrote a piece on her career including an interview that is worth reading if you are a fan of Near’s or just want to keep up-to-date on the latest in Bay Area theater (Timi Near bids a fond farewell to San Jose Rep with ‘Spelling Bee’).

Loni says:
As I passed through the glass doors into the familiar setting of the lobby of the San Jose Rep, I was greeted by a sight quite unexpected.

Plastered across the walls were bright hand-drawn posters announcing the 25th Annual Putnam County Spelling Bee. To the far right, a set of bright shiny fire-engine red lockers. However, it was the excited crowd in front of a make-shift table that captured my attention. It wasn’t long before Clint was accosted by staff to throw his hat into the rink for a chance to become a contestant in the spelling contest. With a swift kick of encouragement from yours truly, Clint answered a couple of questions and was swept into line to be inspected by the actual casting director. Alas he was not chosen, perhaps it was because his outfit was too boring or his personality not bright enough. In any case, I had a good chuckle at his expense.

The excitement of the play extended into the actual auditorium where the posters that had flooded the outside lobby encompassed the walls around. The stage set was an energetic, whimsical, larger-than-life interpretation of one half of a high school auditorium complete with basketball lines on the floors, anatomy posters on the wall, the familiar fire alarm pull, a “no bully zone poster” and the pièce de résistance, a shiny new basket ball net. The stage set was so detailed, I had an urge to walk up and touch all the props.

Then, without a hiccup, fantasy overtakes reality as Rona Lisa Peretti (played by Alison Ewing) struts through the audience and announces the start of the Spelling Bee contest and a janitor nonchalantly crosses the stage with a broom. Alison nails the beginning of the musical with a strong and hilarious opening that made me feel I was indeed at a county spelling bee contest for don’t we all know a Rona Lisa Peretti in our lives? The “swooshing” of the basketball net was priceless.

The almost slapstick humor put on by the contestants was solid and quite expected with the flamboyant outfits and awkward gestures each one of them possessed.

William Barfee (played by Mark Farrell) was especially funny and I spent some time wondering if his haircut was real or a wig.

Chip Tolentino (played by Marc de la Cruz) was one of the more “normal” contestants until he breaks into a wonderfully funny song and dance solo entitled, “My Unfortunate Erection”. His version of an Asian Jesus is an example of an effective way to introduce divinity for comic relief.

One of the surprising highlights of the play was the delivery of the words, definitions and how they are used in sentences. I did not expect this element of the play to be used so effectively, reducing the audience into fits of chuckles. Douglas Panch (played by Steve Irish), the school’s vice-principal, was hidden behind the officials’ table as the vice-principal of the school for most of the play. His voice though, was omnipresent during the musical, projected over the loudspeakers delivering perfectly timed doses of humor straight from the English dictionary.

Although the play is full of laughs, sometimes at the expense of the poor awkward child contestants, through this humor there is a wonderful look into the trials and tribulations of being children and the parents who love them. Comparisons of external and internal projections of confidence of whether they will win the spelling bee, wanting to live up to the expectation of parents and even the frustrations one has as grown-ups with our jobs are revealed.

One of the few weaknesses of the play was in the second half where the humor and pacing is a little rushed as the play tries to convey the long and competitive process of the spelling bee. Some of this repetitiveness as the contestants took turns standing in front of the microphone could be tightened.

Overall, a solid and happy way to conclude the 2008-2009 season for the San Jose Repertory. This play is about audience participation and engagement: from the stage design which was built to extend into the audience to the actual casting of attendees as contestants and finally, the actors who would dance, talk and throw candy at the attendees. It highlights one of the best aspects of live theater, the interactions between the actors and their environment, the audience; thus making each production, each and every night…special.