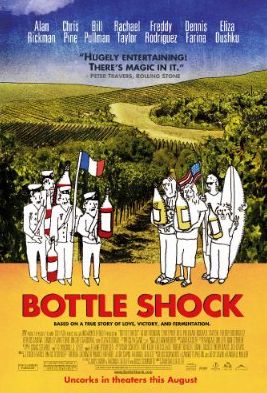 As much as I love wine, it alone cannot carry a movie. Where Sideways succeeds, Bottle Shock fails. The difference? The former is about two guys dealing with mid-life crises with wine as a backdrop. Bottle Shock is just about wine, and it turns out to be a boring lead character.

The film makers try their best to drum up drama and conflict — boxing, bed-hopping, a broken-down AMC Gremlin — but in the end nothing clicks. It’s unfortunate since the real story it is based on, is actually far better material.

In 1976, at the now infamous “Judgment of Paris”, Napa upset the French, placing first in both red and white tastings. That event forever changed the perception of Napa wines. It was no longer a new world curiosity, and could play on the world stage with the big boys.

The Director (Randall Miller) keeps the story moving and the overall look of Napa (Sonoma) is gorgeous with sweeping shots from overhead and along the dusty, country roads, well before Highway 29 became a famous tourist destination. There is a lot to enjoy visually. However, I found at least two distracting elements. The first is the rapid fire, multi-angle, often jarring editing used for even the most basic scenes. For example, when three of the movie’s leads are crossing the street, I counted at least 8 edits. For me, it spoils the mood and distracts from the inherent beauty and innocence.

Also, to amplify the feeling of the early 1970s, the film’s contrast is increased, resulting in severe whites and exaggerated colors. Too much though. At times it reminded me of the look of The Texas Chainsaw Massacre.

Chris Pine, as Bo Barrett, the lead hippie would-be winemaker, is poorly miscast and looks out of place in most scenes, almost approaching caricature.

The bright spot is Alan Rickman, a quality actor. His nuanced voice and deep face bring the movie a genuine feeling, along with befuddled and amused reactions to the Napa upset.

If you love wine, and the history of Napa, then you’ll definitely want to see this movie. It has joyful moments, but mostly it proves that wine itself does not have enough character to hold a movie together. Like real life, wine is best when surrounded with a strong cast of family and friends.