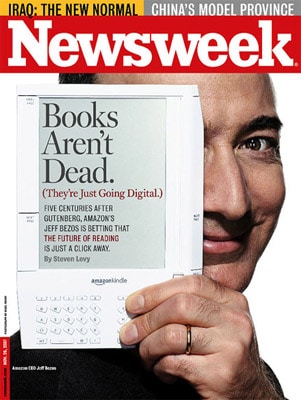 The Kindle is a curiosity.

It seems to generate more hype than it deserves, and yet I can’t help but think there is something there — I don’t know what — that will transform something to something, or someone to something… or something like that. Maybe the newspaper industry will be saved. Or perhaps that’s asking a little too much of this plain-jane black & white browsing device with a funny looking keyboard.

I’ve written about the first generation Kindle before. The idea is certainly not new. E-books have been around for many years. You can download and read them on your cell phone, your old school PDAs, and even, of course, a laptop or desktop computer. The difference this time is that the Kindle is backed by Amazon. Specifically Jeff Bezos, mastermind of everything e-commerce. Combined with an ailing newspaper industry, and the rapid growth of downloadable content (not just newspapers, but also blogs too!) and it’s easier to see why the press love to follow this story.

Then there’s the money and profits. So far, the results have been very good apparently. Surprisingly higher than I thought. Maybe this Kindle is not a curiosity after all. According to a Techcrunch article:

Citi analyst Mark Mahaney … estimates that the Kindle already accounts for “about 10% of total North American book units,” or or 4 million books sold during the first quarter out of a total of 38 million books, he tells me. Those 4 million Kindle books equated to an estimated $34 million in revenues during the quarter (which doesn’t include sales of the Kindle device itself) and added 2 to 3 percent to Amazon’s growth in media revenues for North America. Mahaney also thinks that the 35 percent sales figure suggests that Kindle owners are buying two books per month on the Kindle.

I have to smirk just slightly, though, at the new version of the Kindle, the DX. It’s bigger. And like a lot of things (witness the growth in size of the Honda Civic over the years), especially in America, bigger is better. Or is it?

My original pet peeve with the device was its price, and the new model doesn’t do anything to alleviate my gripe. In fact, the price is now even higher ($489 US). This doesn’t appear to be an issue for the vast number of buyers, and a key target market for Bezos. A recent poll by CNET revealed that over 50% of Kindle buyers are over 50 years of age. Avid readers. With disposable income. And presumably lots of spare time to read.

Another concern is the need to carry another device. The recent success of the smart-phone is largely attributable to the face that they replace so many other devices. You no longer need to carry a separate phone, camera, MP3 player, PDA, portable video game machine and DVD player. iPhone. Done.

Speaking of Apple, I’d be surprised if they sit idly by, and don’t release some kind of larger flat screen, uber device. Like an iTouch on steroids. If anyone can challenge Amazon, it may just be Apple. No one guessed they could do it the music industry.

If you have an unsatiable desire to read about the Kindle, you’re in luck. At last count there are over 1,500 articles on Google News on this very topic. The key question though: what device are you using to read this article?