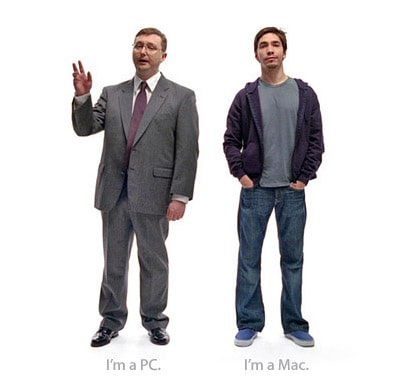 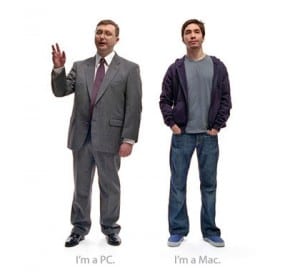 By now, the 2 actors on Apple’s Mac vs. PC television ads are quite famous.

I, probably like a lot of you, get a kick out of “PC” trying to act hip, or accomplish impossible tasks while the younger, calmer “Apple” looks on. The campaign has caught on with its sense of humour, and clever 30 second segments. The nice thing about it, you really do feel sorry for poor PC. He tries, and tries, and tries again. All, of course, with the same miserable, under-achieving result.

All this coming from a guy who hates ads. I fast forward them on TV. Program myself to ignore them on the web when I can.

That is, until I came across the entertaining, banner jumping ads on the CNET web site (don’t you visit every day?). I swear I’ve seen something similar in the past on the same web site, but can’t be sure. This time, I snapped a shot of the screen and thought, why not, whip off a quick blog post on it. It’s worth it.

If you haven’t seen it yet, head over to CNET, and watch the 30 second spot, and see what happens when “PC” tries to booby-trap a banner ad with electrical jumper cables.

I applaud Apple for their creativity. This approach blurs the line between ads and entertainment, if ever so slightly, and effectively captures attention in today’s increasingly crowded, and time sensitive, marketplace. Enough, that it benefits from a viral pop, and word-of-mouth. Both extremely desirable.