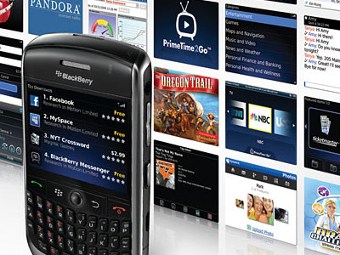 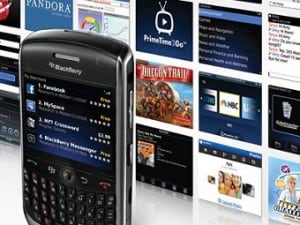 The early reviews are mixed. But at least BlackBerry (or RIM), with the release of their new App World store, are in the game.

Is it just me, or did that take too long?

Once again Apple has taken the early lead. And from what I can tell we’re talking big numbers here. As in billion dollar big. According to some numbers I just saw from a Piper Jaffray report, these small-priced apps could add up to a $1.2B business in 2009. That’s a lot of .99 pachinko.

Also par for the course, the BlackBerry app store is decent, but not as aesthetically pleasing as Apple’s market dominating, colorful happy place. Further, users need to download an application to access the App World store. So get this. Download an app, before you can download an app. See? Not a big deal, but one more example of the little things that Apple does so well.

What’s also interesting when I think about these App stores, is the trend that it represents. Consumer’s seem to appreciate bite-sized product offerings, sliced and diced into exactly the functionality they want at, correspondingly, bite-sized prices. The days of hugely, bloated Microsoft Word-type software seem to be gone forever. Why pay hundreds of dollars, when you only need 10% of the functionality?

So it would seem the battle is for #2. I don’t see, at least in this lifetime, how anyone can seriously challenge Apple’s dominance in this market. So it’ll be BlackBerry vs. Google vs. Nokia? Anyone else? I supposed the scraps Apple leaves behind will be a decent enough sized business.