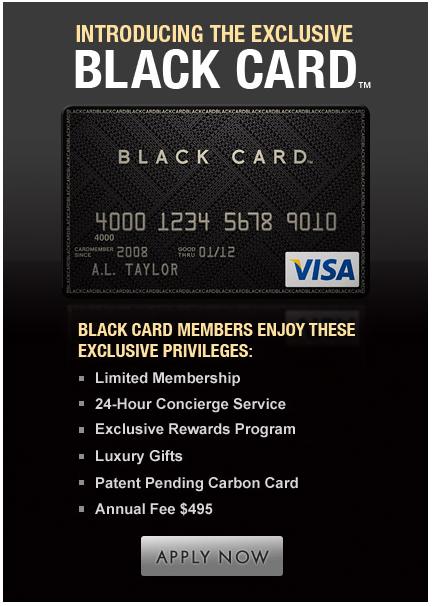 Call me skeptical, but are people ready to line up for a new Visa ‘Black’ credit card with an annual fee of $495 per year?

There must be some people out there willing to sign up. Either that or Visa’s marketing research team is way off, because I keep seeing ads all over the Internet, including in my Yahoo email inbox, promoting “exclusive privileges”.

The very first such privilege listed in their ad? Limited membership.

And I think that’s part of the aura that enables them to charge so much… only a few, special people can get the card. It’s like a line-up of ultra-shallow people at a night club. The longer and harder it is to get in, the more they will want to try.

No doubt this is Visa’s long overdue answer to the successful American Express Centurion ‘Black’ credit card. It is still the king of exclusivity and über fees: a $5,000 initiation, and $2,500 per year. It’s also the darling of celebrities and sports stars who can whip it out and expect instant miracles and ample amounts of sucking up.

Part of the mystique of these cards in the past was the distinct lack of information available about them. This led to lots of gossip and speculation. And if you knew someone who flashed the card at a bar or restaurant one night, it would send shock waves across the neighborhood for weeks to come.

But now, with Google, it’s a snap to find out more, and read stories (for example, here’s the Wikipedia entry on the American Express Centurion black card).

Stories that either make me laugh or cry.