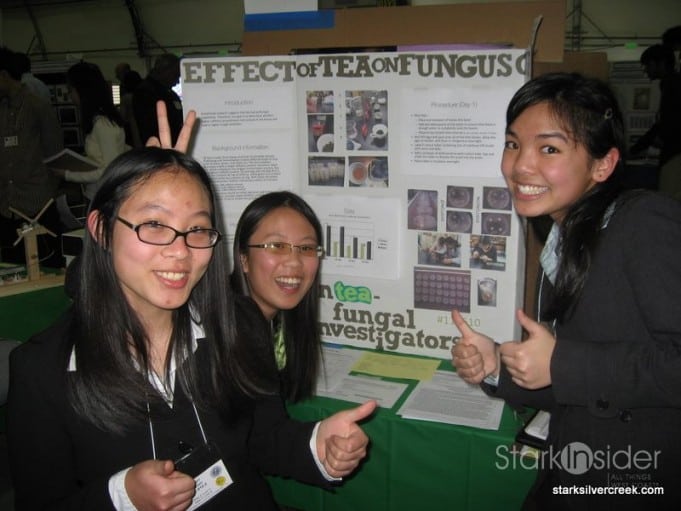 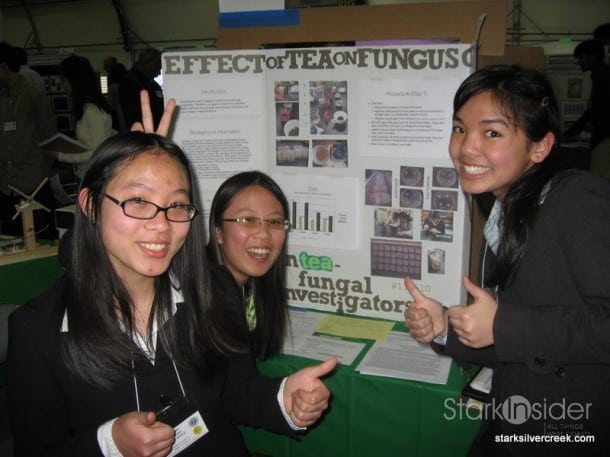 Did you know that most dogs have a “paw preference”, and use their right paw more than their left?

Or that among natural sugar, Splenda and Sweet ‘n Low, the latter is the least likely to promote tooth decay?

I learned all this and a whole lot more when I took some time off this afternoon to judge in the championship rounds of the Synopsys Science Fair in downtown San Jose. It was a bit like ‘Jerry Maguire’ at times… did you know the human head weighs 8 pounds? How do they know this stuff? And… all of a sudden I didn’t feel too smart. 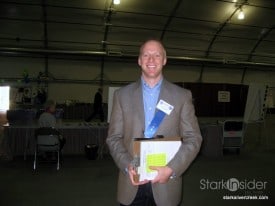 (Side note: I took some interesting photos of an electric sports car that I parked next to today, you can read about that at the end of this post along with “exclusive” photos)

Driving over to the Convention Center I recalled a job interview I had several years back for an executive role with a marketing and IT software company in San Francisco. The COO asked me, “Are you brilliant?” I waited for him to laugh, or show the slightest hint that he was being facetious. This was another first. I said that I was not anywhere close to brilliant: I enjoy backgammon over chess, hockey over polo, and 80s music over classical.

Today though I discovered plenty of brilliance alright. This time, not from Loni, but in the form of hundreds of smart-as-a-whip grade- and high-schoolers eager to take on the world. Their projects and Elmer tri-fold displays were simply… brilliant. But more on that in a moment.

First I had to sign in as a judge. I was then seated at a table in a large, cavernous like room, perhaps around a football in length. One half was for judges, the other for the science exhibits.

It was not long before I found myself surrounded by my friendly, fellow judges. Interestingly, they were all Doctors, and had scientific PhD-level degrees and careers in related fields. What was I doing here? One guy worked for the FDA. Another worked at Stanford and trained monkeys for a living (and I thought that only happened in the movies). A woman at our table was a neuroscientist, who recently made a career transition and became a patent attorney, graduating out of Hastings. Needless to say, conversation was entertaining and quite different than my normal world of marketing, branding and high-tech products.

A semi-witty remark involving levitation and our lunch boxes reinforced the fact that I was surrounded by those curious about science and discovery but not so much about good joke delivery.

As I surveyed the room I wondered about the logistics of pulling it off. This was no small event. Just look at the #’s:

Our team of 5 judges was tasked with interviewing 5 teams. Each judge would take about 15 minutes talking with the team, taking notes and evaluating their project using 6 criteria. 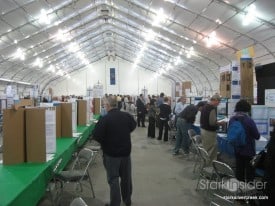 Science fair judging, for the uninitiated like myself, involves background reading on the judging process, preliminary perusal of the projects with students not present and a careful scoring of data, process, presentation and creativity. With my fellow judges armed in the ways of hypothesis, petri dishes and iodine, I instead found myself unfortunately tending more to the Paula Abdul role – “good organization”, “I like that catchphrase: The An-TEA fungal investigators”, “You work well as a team”.

It’s not that I’m a stranger to science. After all, I grew up in a house with 2 teachers as parents. My Mom was a grade-school teacher, and my Dad a high school science and biology teacher (and later principal). So I always had fun stuff around to play with like microscopes, film projectors playing odd colored cell motion clips, and little wiring kits where you make a bell ring with magnets.

All these memories passed through my mind, as I took in the excitement these kids had towards science and learning. And all sorts of categories are represented at the fair: chemistry, physics, social behavior, computer science, electronics, biochemistry and microbiology to name a few.

Despite all the enthusiasm it was hard not to feel for the teachers that were laid off across the County as was mentioned in the opening remarks. Funding remains a challenge too. So it’s thankful that companies such as Synopsys, Intel, Great America, and Rambus step up with donations. Some quick table cloth math indicates that the fair takes in hundreds of thousands per year in donations. And that’s great news. We need more science funding. More focus on engineering, computer and math if this country is going to continue to compete globally.

Okay, back to the kids and the projects. Here are the 5 projects I judged (by grade 11 students), and although I can’t reveal scores or any opinions here, I can tell you all of them were excellent. Our judging panel uniformly agreed that the quality was very high, and we were pleased. It made for some tough scoring (and debating too amongst the judging panel).

This was a timely presentation indeed. The team wanted to find out which yielded better results (in the form of glucose) for ethanol as an alternative fuel: rice straw or corn stover. The conclusion matched the hypothesis. Rice straw produced greater quantities. Unfortunately, as they demonstrated in their exhibit, the price of large scale production is still prohibitive. Although Brazil is innovating successfully in this area.

The question: Does sugar promote tooth decay more than artificial sweeteners? The answer: yes. Your best option, according to these young scientists, is to go with Sweet ‘n Low to avoid tooth decay. But as they point out, natural sugars are still better for digestion. So choose your poison!

Effect of Tea on Fungus Growth

A lot has been said about tea’s anti-oxidant properties. This project was designed around that premise, specifically anti-fungal. Would increasing caffeine levels also increase this effect? The answer: yes. Black tea proved to have the best anti-fungal characteristics. I asked them if this applied to Diet Coke. Unfortunately, probably not; it doesn’t exactly come from a plant.

Identifying Two Populations of Neurons in the Developing Cerebellum

I had some difficulty with the title. Not the project itself, rather my inability to properly say ‘cerebellum’. By the end of the day though I could whip it off with ease! This is a difficult project to explain. It involved color-coding plasmids so that multiple viruses can be injected in an experiment. The work itself was conducted in a Stanford lab with a mentor.

Paw Preference and its Influence on the Behavior of Dogs

Dog lovers will enjoy this one. This project proved that, like humans, dogs generally have a right-pawed tendency. Using 30 dogs and three tests (hand shake, tape and treat) they could determine that dogs tended to use their right paws. Then they tested right brain/left brain behavior in relation to music (pop and classical). The results could then be used to determine which dogs would be best suited for rescue work for example.

So there you have it. And to think this was only 5 of the 545 projects. I briefly strolled through the other aisles, from the 6th grade all the way to 12th grade. There was so many fascinating displays. Truly inspiring to see today’s kids so passionate about science and engineering.

In the end, I walked out feeling glad I contributed my time, however minuscule in the grand scheme, to such a worthy, first class event. Most importantly though, I realized that we, society at large, are truly in good hands. This upcoming generation is imaginative, smart, passionate, articulate, creative… and dare I even say: brilliant. 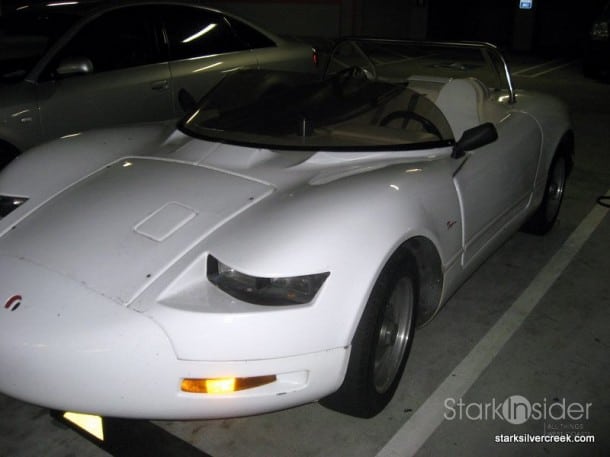 Some magical science dust must be in the air in San Jose today. When I was parking I noticed an interesting sports car under a protective cover.

Being a car lover, of course I just had to park next to it. It looked like a Maclaren with a dash of ’62 Corvette and Jimmy Dean Porsche roadster mashed together. Curiously I noticed it was plugged in to an electric charger on an adjacent column in the garage. Ah, an electric sports car!

Later, when I returned from my judging duties, fate was again on my side. The owner was getting into the car.

I asked him about it. He told me it was a 1995 limited production electric car called the Tropica. He started it up. It was dead silent. Apparently his wife bought it for him in a broken state, sure that it could be revived. And it looked like he has indeed restored the rare car. I watched him drive away silently, wondering how often people like me stop him everyday.