The Cinequest Film Festival in San Jose, now in its 19th year, is in full swing, and last night Loni and I had the pleasure to attend a special screening of Louis Gossett Jr’s latest film, ‘The Least Among You”.

I’ll admit, hometown pride washed over us as we headed downtown to catch the event at the gorgeously restored California theater. Cinequest has been steadily growing. Over 2,000 films were submitted for this year’s festival, with about 200 accepted for screening. According to the Cinequest web site, over 600 film industry staff are in town for the event, representing some 44 different countries. 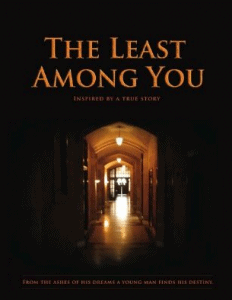 Energy was in the air as we entered the California theater. Volunteers in red shirts buzzed around, directing traffic, smiling and making small talk with patrons. Cameras and press crowded a photo shoot and interview to the left with Gossett and other cast members. Fortunately we found some good seats close to the front, and after a short intro and thanks to the sponsors, the lights dimmed, and the film began.

Review: ‘The Least Among You’

When everyone is trying to do the right thing, motivated by their own principles and values, as one of the characters suggests about half way through the Indy film ‘The Least Among You’, understanding context becomes increasingly important. In this case the president of an all-white seminary chases his dream of a $10M expansion supported by banking buddies, while Robert Kelly unwittingly pursues his fate as its first African-American student in post-Watts riots 1965 Los Angeles.

The movie, based on a true story, chronicles the life of Richard Kelly, who accepts a plea bargain to attend a Christian all-white school under the guise of becoming a pastor. Quite a change-up for the troubled youngster from Georgia. Soon he discovers he is being used as a pawn by those who sees Kelly as a “champion” for African-American rights that could accelerate the school’s standing, especially among investment bankers.

With the help of a janitor, played by Louis Gossett Jr, who mentors and spiritually guides him, Kelly sets out, much to the chagrin of the school board and most of his classmates, on an against-the-odds protest of school board policy and decision making related to race.

There are show-downs, epiphanys and self-discovery throughout the journey that sees Robert Kelly evolve into a leader, and a man who stands by his convictions even during the lowest moments of despair.

This is a decent movie. Perhaps not great, but certainly an impressive achievement for an independent film made in only 18 days. The acting is solid, with a few stand-outs and one regrettable choice that unfortunately prevents the movie from becoming something greater. The lead actor, Cedric Sanders, in his first ever movie role, is inconsistent. At times, he shows great promise with an intense stare that evokes part Denzel Washington and maybe even a younger Louis Gossett Jr himself. But in several scenes his acting chops are severely tested by the veteran cast surrounding him. My biggest issue though is his narrow range of facial expression. Too monotone. I think this is a matter of experience, and transition from stage to film. This film requires the lead to question everything around him, including his faith, friends and family in light of tremendous odds. There needs to be more rage, more charisma.

Cedric Sanders is a likable person and came across very well on stage at the end of the film, fielding questions from the audience, and Loni and I both felt like he is early in a career that shows lots of potential. We really hope he does well. When asked about future projects by on audience member, he shot back with a smile “I’m just a brother, always looking for a job”, to much laughter.

Other actors do better, and expectedly-so with their long resumes and big screen success. In particular Lauren Holly and William Devane both stood out. Both play characters dealing with loss, and manage to successfully channel their own morals and conviction, without losing human vulnerability. Fine work. I particularly enjoyed one scene, shot in a church, between Devane, the capitalist-motivated seminary president, and the bright-eyed Robert Kelly (Sanders) as they use a pruning metaphor to discuss who ultimately will make the decisions that will guide their destiny. A well written scene.

Louis Gossett Jr was solid as always. Although at times he can mumble his lines which made understanding some of the dialog tricky. But then again here you have a great “presence” actor in Gossett. In any scene, he commands the screen. He carries decades of acting experience into any situation and, although I can’t describe how he does it, it provides much needed depth and sincerity.

The direction was very good, especially, again, considering the 18 days they had to shoot the film. I thought the music was spot as were the sets and overall look of the film. I should add that the sound quality at the California was far better than last year when we watched ‘Art of Travel’ in the very same theater. It was clear, loud without being overbearing, and the surround sound filled the theater adding to the ambiance.

After the film, Louis Gossett Jr spent about 20 minutes discussing his career and the story of Robert Kelly. After, he was presented with a Cinequest Maverick Spirit Award for his achievements and contributions to independent film.

The man in person is every bit the actor you see on screen: warm, genuine, commanding and passionate about life. If I read between the lines correctly, it seems he will be doing more directing in the future, citing big names he’d love to get together on screen.

To cap the evening, additional cast members including Cedric Sanders, the director/writer Mark Young and the real Robert Kelly himself came on stage to also field questions. Mark Young’s account of the inspiration behind the story was moving as he tells us about a chance meeting that leads to his discovery of this true tale of a young boy guided by his mentor to achieve spiritual harmony.

Overall, another great event put on by Cinequest here in San Jose. Next, Loni and I are off to see Kevin Pollack’s ‘Evening of Film Comedy’, also at the California.