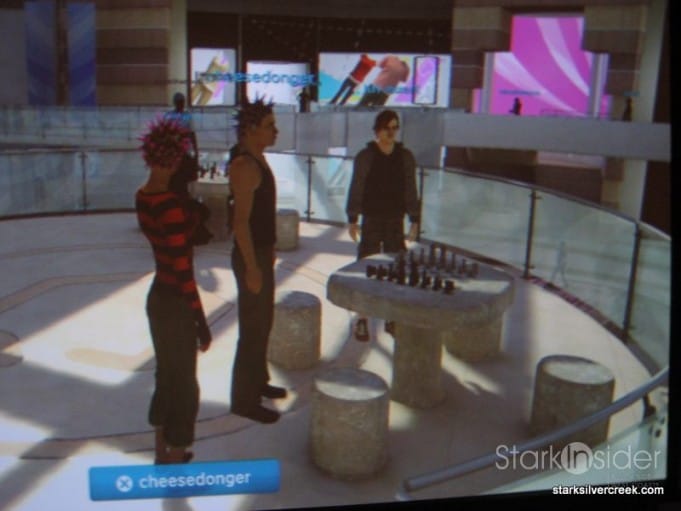 (Update: Photo gallery at end. Plus, I’ve added links below to other articles and reviews of Home)

Social networking is here to stay and you could even say it’s starting to mature. But the virtual world is still in its infancy. The most successful to date is World of Warcraft, where legions of fans pay a monthly fee to build a character and engage in adventure, the Dungeons & Dragons of the online world. Others such as Second Life had considerable hype, but have yet to find an ongoing market.

So it’s only natural the battle for social networking, which equates to big advertising dollars and recurring monthly revenues, hit the living room, just like the battle for downloadable video and all things entertainment. The Nintendo Wii was successful early on with creative avatars, cartoon-like icon representations of your virtual self. Sony with the PS3 had a rocky start and notable had no virtual world (although it did have an online store).

Today, Sony unleashed its long-awaited effort called ‘Home’. It’s still in beta, and has been for some time, but now it’s more widely available then ever before.

Installing the new Home software was easy. I clicked the icon “Home” and within minutes had downloaded and installed the software onto my PS3. The program had to “reserve” approximately 3GB of hard drive space, presumably to make room for all kinds of future goodies, or in Sony’s eyes profits .99 at a time in the form of micro-transactions. More on that later.

When I started the program, some glitches were apparent. I received a few server errors, and had to try several times before I could get in to the Home world. I suspect Sony’s servers are receiving abnormally high traffic loads with new users jumping on board.

Creating your virtual self

Like so many of these virtual reality simulations and Web 2.0 applications, you need to create a cartoon-like representation of yourself. It can be fun. You have unlimited combinations it seems in choosing your physical traits and clothing. I quickly whipped up a saucy character with spiky hair and overwrought make-up. Hey, if you’re going to live virtually might as well not be bland.

It all starts in your $4M condo overlooking the Riviera

After creating the character, it was time to enter the world of Home. And it’s a sight to behold. I was standing in a modern condo overlooking what could be the Riviera. The glass, sliding floor-to-ceiling windows offer expansive views of waterfront villas, mega-yachts and rolling hills. This really is the good life!

I move around with the PS3 controller easily. The controls are simple, and I quickly figure out how to turn on a light (but it’s not dark, so I turn it off to save energy), walk out to the balcony, and sit on the couch. I add some retro wallpaper, and stand back to take a look. Ok, that was 10 seconds of fun, what next?

Time to socialize at Central Plaza

My condo was fun, but I don’t see what else I can really do there, so I head to the exit. At that point, I’m prompted to download ‘Central Plaza’. It only takes about 20 seconds. Then I am able to walk out to a bustling plaza. I see plenty of other people, some in ghost form, others closer fully rendered, each individual in character. Bubbles float around as people talk to each other. I hear music, talking and natural effects such as birds. Quite impressive.

To my right is a nice looking theater, so I head over for my first stop.

After going through another short download process (with no errors), I enter the theater. Sony has done a good job simulating the feel of a large multi-level movie theater, replete with lighting, red carpets and a slight echo feeling as the sound bounces around. I can almost smell popcorn. But again, I wonder, no what?

As I walk around I notice people sitting around, others engaged in conversation. One person cursed Sony for giving them yet another excuse not to exercise. I walk up to a random stranger, and use the controller to pull up a set of canned messages. “Hello”. It floats into the virtual world. I don’t know if anyone sees it, or reads it, or even know I’m there. Someone says “Follow Me”. Others, apparently with PS3 keyboards type comprehensive messages. Not surprising, meaningful dialog is fleeting. Up on the screem, a loading bar is almost complete.

Now a movie trailer is playing. Twilight. It looks impressive. Here we are, watching virtual selves watching a movie in a virtual world. Then a music video starts. I’ve seen enough. It’s impressive to look at, but it feels the same as watching movie trailers or videos on the PS3, or on a computer. I guess I’m missing the social networking element.

This was a happening place. There are people playing pool, in the arcade, and of launching balls at the bowling alley. It was packed. When I tried to bowl, I couldn’t get slot. So walk to the arcade, and all the machines there too are occupied. Ditto the pool table. Even with almost limitless supply of memory, hard drives and CPU, Sony decided to duplicate all the frustrations of real life too: line ups.

When I return later I have better luck. Bowling is simplistic, but engaging. I ended up playing with 2 others. One of them was RustyNutzzz who declared himself not a great bowler. And he was right. Later, I headed over for a game of pool. The graphics were great. It reminded me of my university days, skipping class to play some 8-ball at 9am. When the other player is shooting, though, you don’t see anything. Just the resulting shot. I found that odd. I’m sure Sony will continue to improve these details.

If you like bubbles, I’m sure you’ll enjoy the bubble machine in the plaza. Several people stood around watching it, while disco dancing, or giving out salutes, and all kinds of other gestures.

What’s a world, virtual or otherwise, without a place to stroll aimlessly, spending money on stuff. This mall is also impressive graphically, with two levels, a grand entrance, and like the rest of Home, lots of advertising. One ad I saw was a billboard for Twilight, and another for the PS3 wireless keyboard controller. I was beginning to understand the goal of Sony’s Home.

I walk into the first store on the right. It’s empty, and shows me a shopping cart screen, but with no items to buy. I leave. The next store is a furniture store. A wooden chair is .99. Micro-transactions! It may seem small, but I already can see the potential. It’s a gigantic dollar store.

At the threads store next door, you can buy a pair of star sunglasses for .99.

On the second level are more stores, all the same as the first level. The chess tables in the mezzanine were deserted. I had no problem taking a seat at a chess board. On the way out I walk past a real estate agency. Again life imitates art. It too is dead. There is a summer home, but I can’t find a way to click on it or find a price. I’m sure I can’t afford it anyways. Besides, they started me out in an amazing condo, and I’m not complaining.

Similar to meeting spaces, forums, or Myspace groups, is the option to create ‘clubs’. These cost $4.99. However, Sony clearly states at some point there will be ongoing fees associated with this service, starting no earlier than March 31, 2009. I expect they will be wildly popular.

All the menus and controls were zippy. No issues there. Serious users will want a clip on keyboard, and also a headset.

Maybe my paranoia, but I felt a lot of people were up to no good, just milling around, looking like gangs.

Clearly I’m not the target market, so it’s hard to make judgments or evaluate this service. I can say it looks great, loads relatively fast and shows potential. As for the value of walking around aimlessly, disco dancing in a plaza with strangers, or waiting in virtual lines, well that’s something you can assess. It’s a fun distraction, and the beta is free (but not free of advertising, that’s for certain!).

A good first effort by Sony. It was a long-time coming. Now it’s up to the users. Will it work?

What others are saying

The Washington Post
“I’m hoping that the offerings in Home get a little more interesting as Sony opens the service up this week. “

Gizmodo
“Home could be a great platform one day, but Sony needs to provide the content to back it up. And right now, anything short of more advertising is lacking. In Home, I feel like a prisoner—my uniform matches all the other inmates as I walk around beside the other inmates endlessly with nothing to do.”

St Louis Post-Dispatch
“Mostly though, Home’s avatars just sort of walk around for now. That’s because Home’s still in “beta” — a software testing phase — and the virtual environment has not yet evolved much beyond an urban shopping mall-type setting, though there are real brands of products visitors can browse to outfit their avatars or their avatars’ living quarters.”

TIME
“Home could work too. But Sony has got to lighten up and let its users take a bit of control. Open up the platform and understand that people want to feel as if their Home is their castle — not Sony’s mall.”