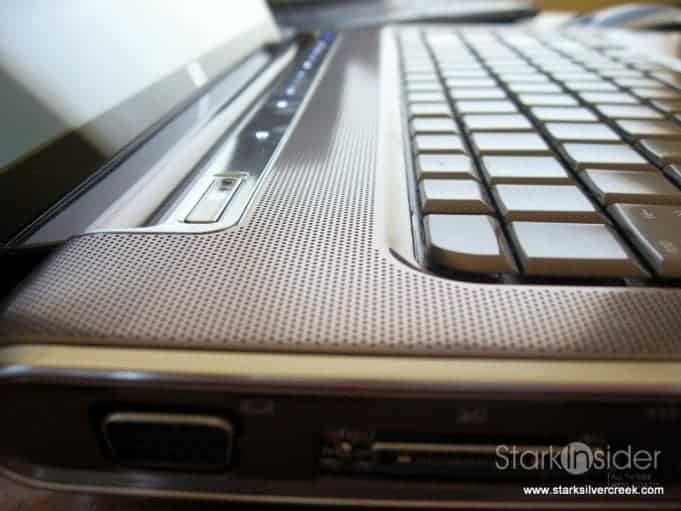 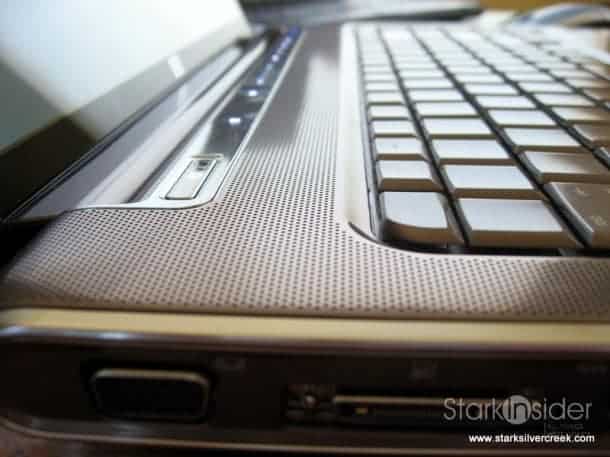 Previously in my laptop buying guide, I suggested HP as a good manufacturer to consider for bang-for-the-buck. Case in point, this HP dv5t laptop with 15.4″ screen.

Starting at $579 (list price) it offers plenty of features, many not even found on higher end models, at a reasonable, almost too-good-to-be-true, price. Even better, with the holiday discounting going on now, it’s not uncommon to find the dv5t laptop on sale for 15-30% off list.

Part of the Pavilion line up, it slots in the middle, above the Compaq Presario and below the premium HDX lineup. And although they bill it as an “entertainment” model, it is unquestionably an all-rounder capable of handling any business or productivity chore, without any over-the-top gaming aesthetics added to the case.

I was able to spend some time with a dv5t putting it through its paces. Did it deliver on the HP name? And how would it compare to other choices including Dell, Lenovo and Sony?

My review model arrived via drop ship direct from China in a non-descript, compact brown box with simple HP logo. It was easy to un-pack. Although the contents were encased with simple sleeves and cushions it seemed less protected than I expected for a journey around the world. Still everything was in pristine condition.

I followed a simple start-up guide, inserted the battery. Then I opened the lid and pushed the power button and it came to life. I like it when gadgets come charged and ready to use.

Nice features indeed, especially the upgraded display which bumps resolution up to 1680×1050, great for viewing multiple applications and windows at the same time. I chose a modest processor, however, to keep price down. You can upgrade it to something like the P8400 which is a popular choice for more horsepower, however it adds $150 to the price.

Regarding the finish, I chose Bronze. The standard Chrome finish it just too bright for my tastes, and captures light reflections all over the place.

Before taxes, this configuration lists for $1,023.99. However, you can find it on sale often for 15-20% typically, and by the time you read this, I expect even bigger holiday and post-holiday promotions.

The dv5t felt solid out-of-the-box. Everything is well engineered with good build quality. The edges of the case are nicely rounded, as is the perimeter of the keyboard. The weight felt ok, not too bad considering it’s a 15″ model, but certainly not as portable of course as my 14″ ThinkPad.

The bronze finish is nicer than I expected adding a nice design touch to the case. A small imprint repeats across the lid and inside without distracting. The keyboard is color matched.

The lid requires two hands to flip open and the hinge is solid with nary a squeak. The infinity display option, I suppose like an infinity pool, runs from edge-to-edge, and looks fantastic. Although I can see myself starting back in the highly reflective screen. More on that later.

I’m a long time ThinkPad user, probably for almost 10 years now, so I’m used to the Lenovo (IBM)-style keyboard, trackpad and trackpoint. So I was somewhat surprised to find this HP keyboard to be excellent. I found the layout intuitive. Dedicated page up and page down keys are stacked along the right side with the home and end keys.

A lot of reviewers talk about “keyboard flex”. That is, when you push down with the palms of your hands gently on the keyboard, how much does it flex. This is probably an indication of build quality and durability. ThinkPad is, or has been traditionally, the gold standard. When you push down on my T42p for example, it’s rock solid, with the tiniest bit of flex.

The HP dv5t scores high marks for high build quality, the keyboard has minimal flex. Definitely more than the ThinkPad (though keep in mind it is pricier also), but I was impressed. The entire keyboard, surface, and palm rests are a solid comfortable place to spend time working and playing.

In terms of noise, the keys do emit a clack sound when depressed. Nice for tactile feedback and typing accuracy, but not exactly quiet. Still I found it completely acceptable and on par with most other vendors.

The trackpad is a decent size and finished in chrome/silver. A disable button sits just above so it can be turned off to save battery if you are using a mouse and to avoid accidental pointer movement. A vertical scroll bar, as is pretty much standard with most laptops, is on the right size and works effectively to easily move up and down pages without moving away from the trackpad. The two buttons below I found easy to use with a satisfying click on feedback, but much quieter than, say, the Sony’s which are very “clacky”.

The HP infinity display is a knock-out. I loved it. Text was easy to read even at the 1680×1050 resolution — although I did increase the default Windows font size to make web pages more readable. Screen brightness was impressive, and I often found myself turning it down even during the day.

Comparing this display to my older ThinkPad was no contest. Colors were vivid, sharp and bright on the HP. This Infinity option is $125, but I would rank this up there along with the processor as the two most impactful choices you can make when building your system.

One concern I had was the “glossy” screen. Again with my ThinkPad I’m used to a matte finish. With the HP screen, as much as I loved it, there were times where it was distracting to see my befuddled self starting back, particularly during the day or with bright lights in the background. At night it is less an issue. But many times it can feel like looking into a mirror. I suppose it’s something I could get used to over time. After a while I found it less an issue as I focused more on content on the screen and less on its reflection. Walking around electronics stores I realize too this it the way most people seem to like it, as almost every laptop display now is of the glossy variety.

The other thing I noticed with this widescreen display is how much extra unused room there is to the left and right of most web sites. It’s unnoticeable on older non-widescreen displays. But with this HP surfing many sites was like watching a letterbox movie, only with the bars on the right and left. The benefit of course is space. I could easily have two windows lined up side-by-side, convenient for running Microsoft Word and Firefox, for example, at the same time without window flipping.

I ordered a “high capacity” upgraded battery. It’s still a 6-cell, but with apparently more umph. I like the way the batter locks in the bottom of the unit, and does not just out at all. It sits flush with the case. Running the dv5t on standard brightness with wireless switched on I got about 2 hours of running time, before Windows began to warn me. That seems ok to me, not great but good enough considering the size of the display.

This is another strong point. There are 4 USB connectors (2 on each side), a firewire port, HDMI display connector, ExpressCard expansion slot, multi-card memory reader slot, ethernet, external display, eSATA high speed data connector and docking station port. Quite a list!  Suffice to say, you will be covered for many years to come in terms of expansion.

On the front are standard microphone and headphone jacks (2). Hard drive and memory expansion is available on the bottom by removing a few screws (one for memory).

I had no issues with wireless performance. Once connected to my wi-fi network, the singal remained strong throughout the house and outside, and did not drop. A tiny backlit button along the control strip below the screen allows you to toggle wireless power.

The speakers are by Altec Lansing. They sounded very good considering it was a laptop. The sound has a pleasing quality with clean timbre and decent volume levels. Again, compared to my trusty ThinkPad, the HP was leagues better. For truly experiencing the best in music or movies I use headphones, but for the occasional YouTube video, market report, or John Stewart these will do well.

If you want a portable machine, this is not your best choice. You’d be better off with its 14″ twin, the dv4t which offers virtually identical specifications and performance with about 1 pound less weight, and more compact dimensions. Still the dv5t is not bad at all. I found it easy to move around from dining room table, to couch, to office, to car and airport. I did notice the extra weight though compared to my 14″ ThinkPad and I would probably sacrifice an inch of screen space for slightly easier mobility if this were my everyday machine.

It booted up Windows Vista quickly. And I never felt as if I was waiting when using it. Everything is responsive. The hard drive so quiet I could barely hear it at work. The fan does run at a low rate almost constantly, but it was on par with other laptops I’ve tested.

The only nit I had was my rapid browser scroll test. Not scientific by any means, I load up My Yahoo in Firefox (and also Chrome) and scroll quickly up and down to test refresh speed and overall responsiveness. I did detect slight sluggishness here, despite the NVIDIA graphics processor. Also I noticed the Windows Experience test  was a low 3.5. Surprising considering my older ThinkPad comes in at 3.2. Some Internet research reveals that others believe this test to be not accurate. But it did make me wonder.

There are a lot of positive reviews of this laptop, and I can see why. It offers a laundry list of features at a great price, in an attractive design from a tier 1 brand. However, I did run into some issues, most of which I have not seen anyone else write about, so it could be just me!

For all these reasons, and because I don’t mind a drab black encased business laptop, the HP dv5t would not be my first choice for an everyday laptop.

Still, this is an excellent laptop. If you are considering the HP dv5t you should cross-shop it against the Dell Studio 15, Sony VAIO NS series, and Lenovo’s SL or R series.

The design is attractive, the keyboard is very good, and build quality just short of the ThinkPad standard. Perhaps best of all, the price means you can have it all for around $600-700. Minor quibbles aside, I highly recommend it.