I finally received Cloverfield on Blu-Ray from Netflix after a bit of delay. It was a surprise theatrical hit and now also seems to be doing well on DVD and rental. Based on the trailers I wasn’t exactly sure what to expect. It seemed to have 9/11 overtones, that of a mega-force of some un 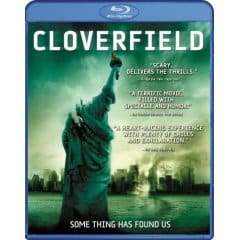 The movie is shot exclusively in first-person, a style The Blair Witch Project effectively used to propel a low budget movie to stardom in 1999. For many, it can be disorienting and off-putting. At times, watching on the big screen I did have moments of nausea.

So those who don’t enjoy fast-paced, MTV-style, rapid fire camera direction, will want to avoid Cloverfield.

The movie itself is well made with great sound and visual effects in all the right places. The beginning of the movie introduces the twenty-something characters at a going away party. Shortly after, chaos ensues from an unseen force.

This is where the footage from the “discovered” videotape begins to echo 9/11.

Early on we get a dramatic ‘Planet of the Apes’ moment in the streets of New York, and from then on we follow the confused actors stumbling through debris, explosions and destruction.

Cloverfield is refreshingly tight-paced, and, at only 85 minutes, is a welcome change to some of today’s overly-long, super plus-size, special director edition movies. Why spend more time than necessary to tell an effective story?

One scene in the movie tests the new 2.0 generation’s to document everything on video. In this case the decision to keep filming for one of the survivors came with apparent life-threatening circumstance. Do I continue filming our escape and risk death, or lose the moment? Why risk losing a great blog entry or YouTube video just to spare your life!

I won’t give away the ending, but throughout I kept trying to guess the twist. The actual ending the director used is spot on, perfect. I wouldn’t change a thing. And yes it surprised me, but for reasons not expected.

Clint says: Cloverfield is lots of fun; a well-made War Of The Worlds 2.0 movie that will give your subwoofer a workout.