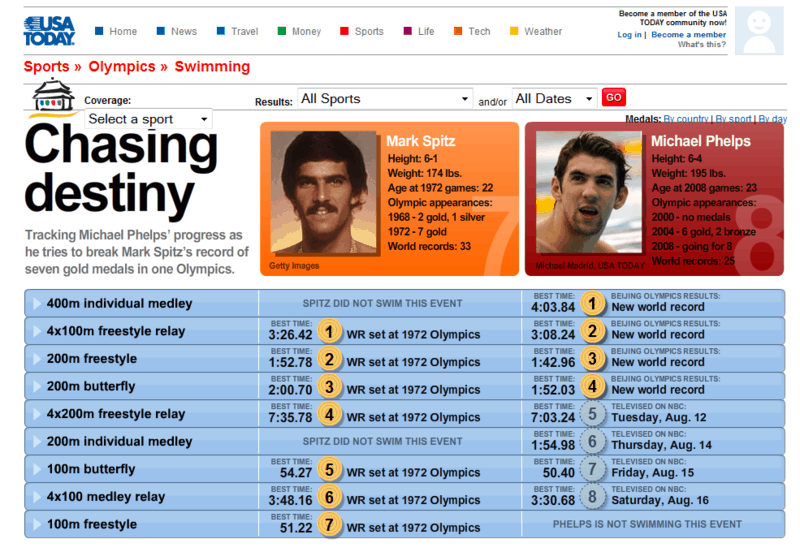 We’re enjoying the Olympics a lot. The opening ceremony was an incredible spectacle, despite emerging stories now about a Chinese Milli Vanilli (the lip-syncing little girl) and digitally enhanced fireworks.

I can’t believe Latvia beat the US in the opening beach volleyball match. Does Latvia even have a beach? It has water along the border, but it’s so far north compared to California. And did they have The Beach Boys?

I was impressed with the Chinese crowd’s response to the US team during the parade of nations. It’s nice for a change to get a positive response for the US, especially on Chinese soil. Wonderful stuff. The crowd was also classy in their reaction to the Iraq team, and spoke volumes in their virtual silence for Iran.

A few highlights for me so far have been basketball and swimming.

It is a thing of absolute human athleticism to watch the US men’s basketball team in action; Cirque du Soleil meets Brutal Strength. So much talent. A joy to watch. Although I was hoping China would keep it closer in their game, they played well. I am happy also the US team is doing what it can to erase ill feelings about previous teams (for one example see Barkley’s elbow).

Swimming is of course unbelievable. I never thought it could be so exciting to watch. Michael Phelps is on another level all together. To watch his turns and his impeccable sense of timing and strategy is a thrill.

I thought USA Today produced an informative graphical comparison of Mark Spitz and Michael Phelps. Take a look at this link here.

One final comment: what is up with NBC, time zones and the so-called “LIVE” coverage? How confusing. On the west coast pacific time zone, NBC insists on watermarking coverage “LIVE” even though it is tape delayed with results already leaked on the Internet from the east coast. It would be better if they carried it live at same time for both east and west coast. It’s anti-climatic to watch once you know the result.