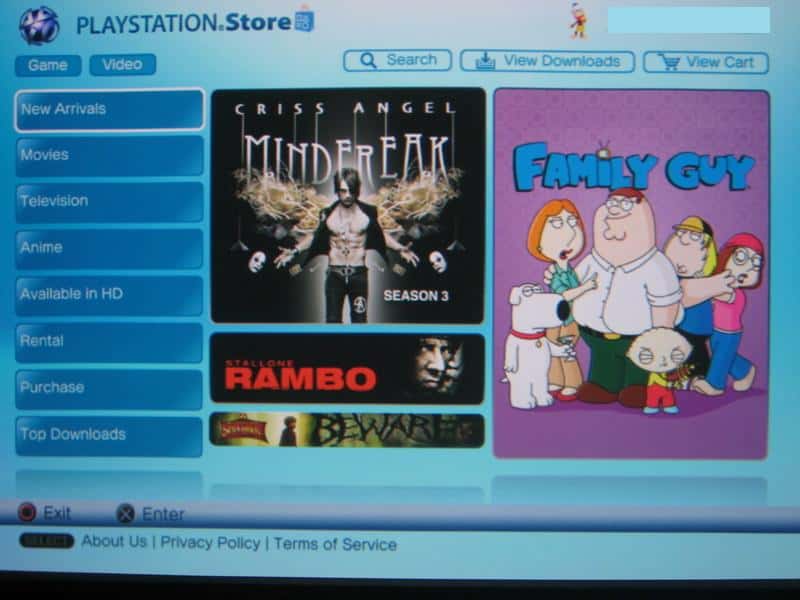 Although I’m probably not the target audience, I gave the new PSN video download service a spin tonight. It probably helped that Loni was traveling to present at a conference. Firstly, I’m a perfectly fine Netflix subscriber and secondly somewhat skeptical when it comes to downloading large video files over the web. Why go to the bother when you can insert a high definition Blu-Ray disc and be done?

Well my initial reaction is quite positive.

The first indication the new service was live was an email from Sony outlining new terms of service. Among the details was information on rentals which can be stored for up to 14 days and viewed for up to 24 hours upon first play.

I was curious to see how easy this would be.

So I clicked on the PlayStation store icon on the PS3. A new “video” button is clearly marked in the top left and switches the store from games to movies and television downloads. Ok, so far so good.

The layout of the store is the same as the game service, that is small tiles are used to represent content with a description in the left window. The interface is snappy. I was impressed with the speed at which I could jump through various menus and click with little delay.

Content is organized in the main menu into 8 categories: New Arrivals, Movies, Television, Anime, Available in HD, Rental, Purchase, Top Downloads. From there you can navigate deeper via by genre, new arrivals and network or other options depending on the category. Again this was intuitive.

Fortunately Sony has added some search capabilities which will come in handy as the library grows. You can use the search button and clunk away with the PS3 controller or preferably use a Bluetooth keyboard to pinpoint specific content. Also, you can view by letter.

I wanted to see how good downloaded HD content looked. So I browsed to Movies, and under the horror genre I found an obscure, but well reviewed title called “Retribution”. Two versions of the movie were available for rent: $4.50 for HD and $2.99 for SD. I opted for HD and checked out.

I was given the option to view the movie as it downloaded. And here’s where I was skeptical. But to my surprise the movie began playing after about 1 minute. Approximately 3 minutes later though the movie paused and the PS3 indicated it was “buffering”. Then it would take another minute or so before resuming. Not terrible considering this is HD content, but I couldn’t stand trying to watch a complete movie with these interruptions. My suggestion would be to let it download for 20-30 minutes first before starting playback. Sure it’s not instant gratification, but is certainly decent considering you can rent a movie and watch it in HD without leaving the house or visiting your mailbox. In the movie progress bar, Sony has added a lighter gray to indicate progress of download.

The total movie size was just over 6GB. The PS3 drive on my unit is 80GB and only has about 16GB free so there is not much room for additional content. I’m not sure if Sony allows purchased and rented content to be stored on an external USB device, but that would helpful.

The video was very good. Although I did not have the same movie in other formats to compare, I did comparisons against other Blu-Ray and Dish HD sources and was impressed. I’m not sure if the material is 720p or 1080p as the description only indicated “HD” with no additional detail. Although minor, this is one area I think Sony needs to improve.

For audio, unfortunately the movie I downloaded only had 2 channel sound, something I only learned after rental. Again it would help to have detail about the audio track in the store.

There is decent enough content, some in HD (but only for rental), and the process is easy. As mentioned I’d like to see more details on the video and audio formats, but knowing Sony’s history of regularly updating the Blu-Ray capability of the PS3 I’d expect the same of this new service.

The pricing is on the high side. A modest Netflix monthly plan costs $9.99 and gives you access to tens of thousands of DVDs and a smaller, but growing library of Blu-Ray. It also provides instant viewing options via the Web, and has an integrated service offering through a partnership with Microsoft and the Xbox 360. I’m sure many head-to-head comparisons will follow in the coming weeks.

Given that the PS3 is already a superb media center for photos, music and videos, the new video download service is icing on the cake. And it’s known to play games too.

Oh, on that movie “Retribution”, it’s the Japanese “Angel Heart”. Moody, dark and full of soul searching, angst and ghosts. It looked great in HD. 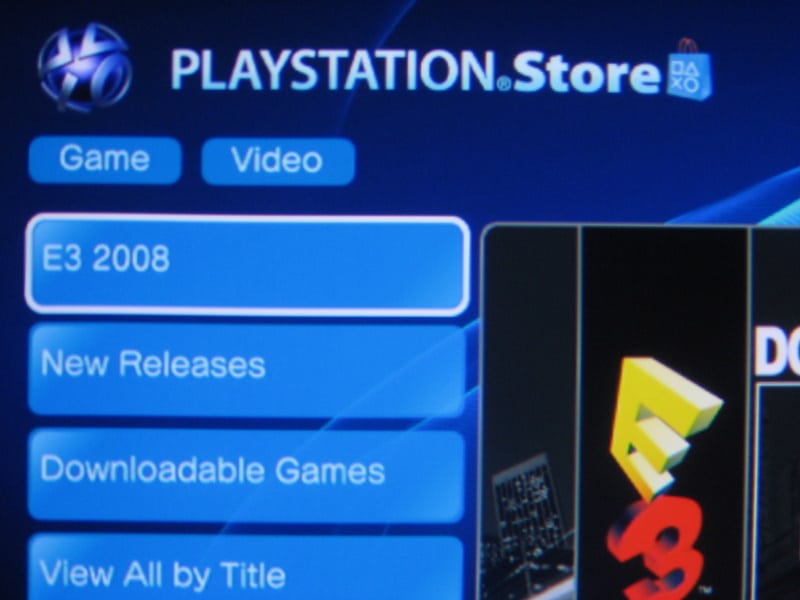 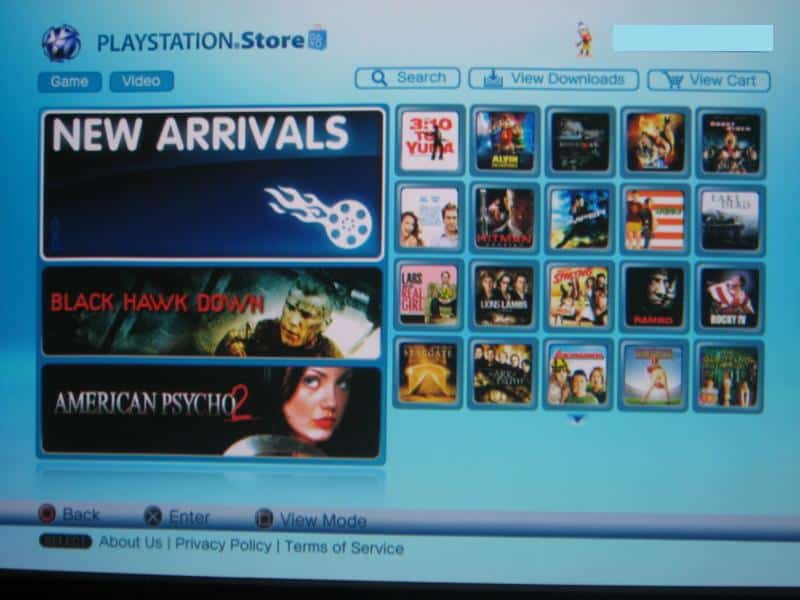 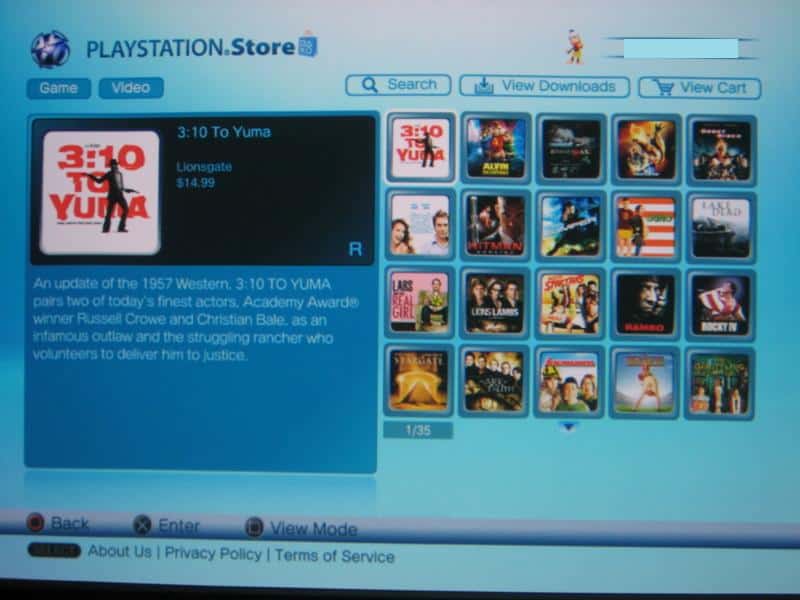 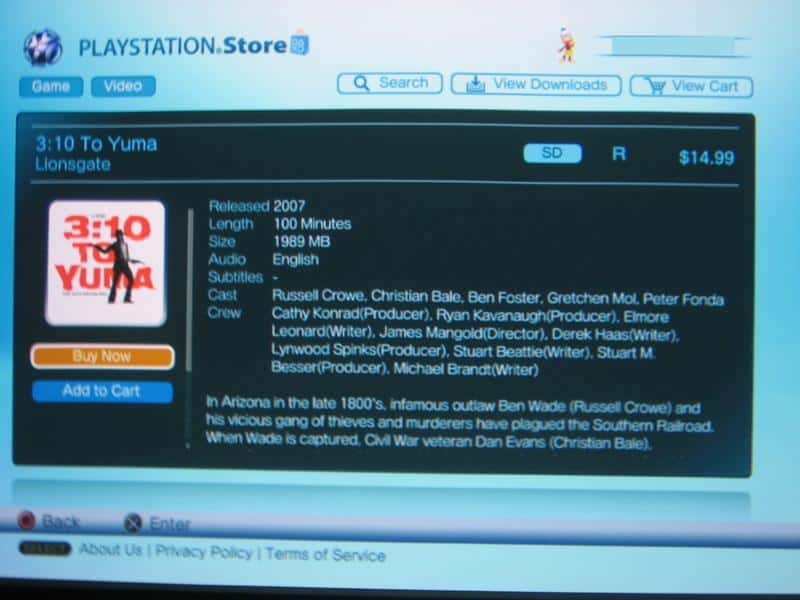 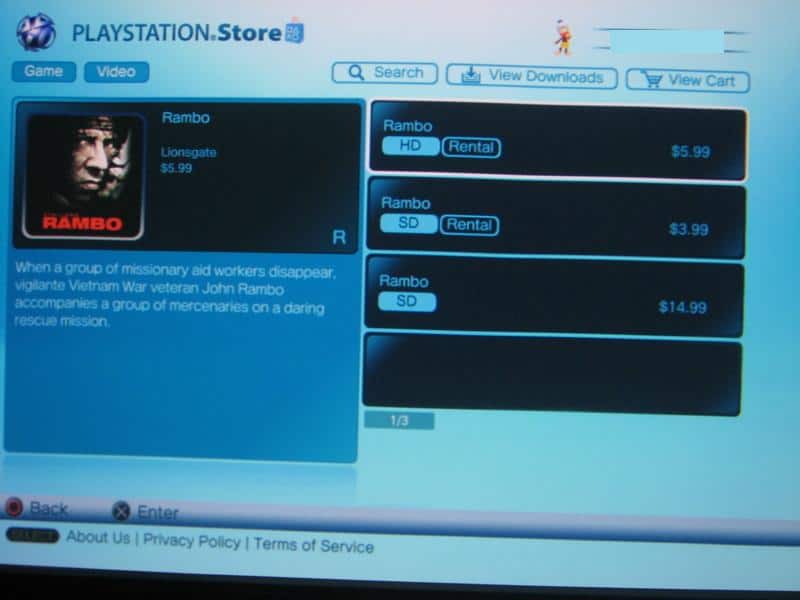 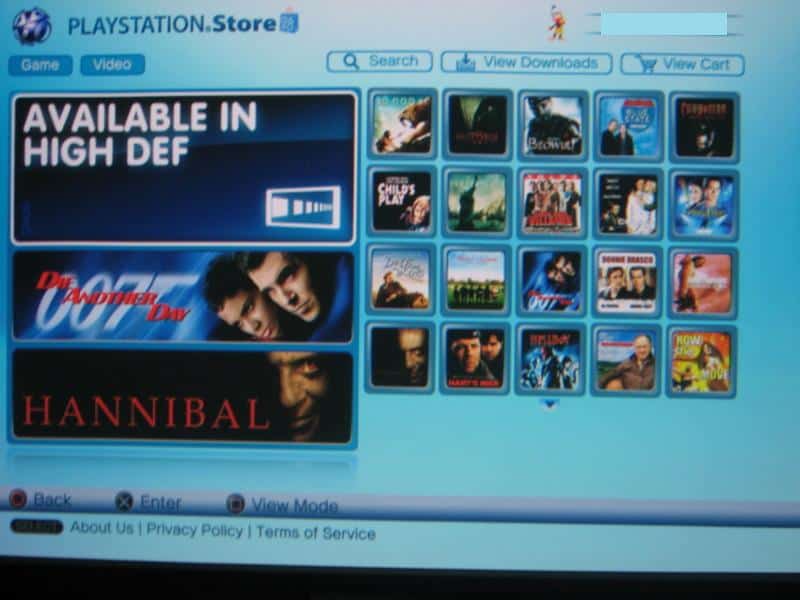 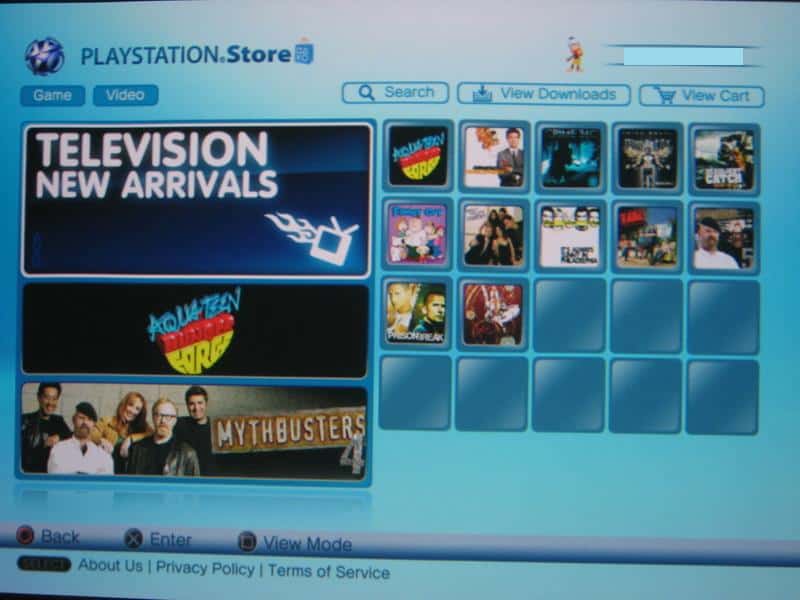 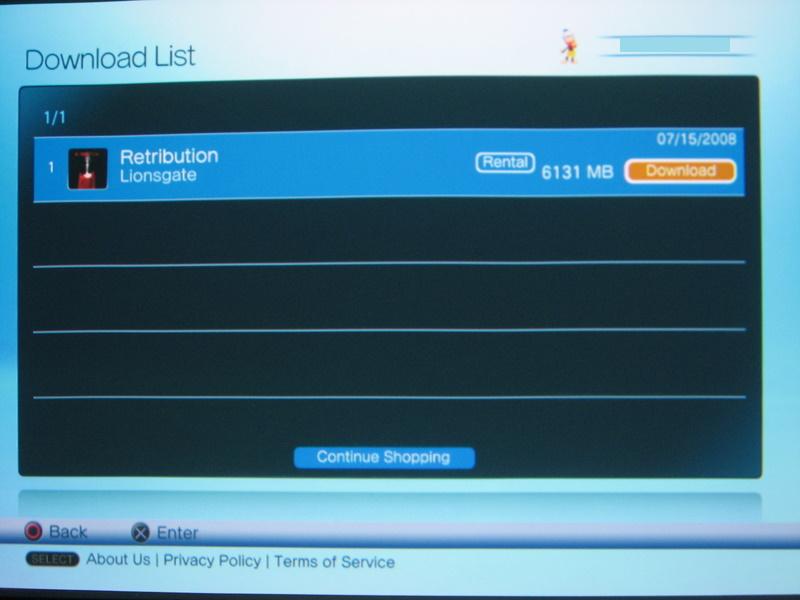 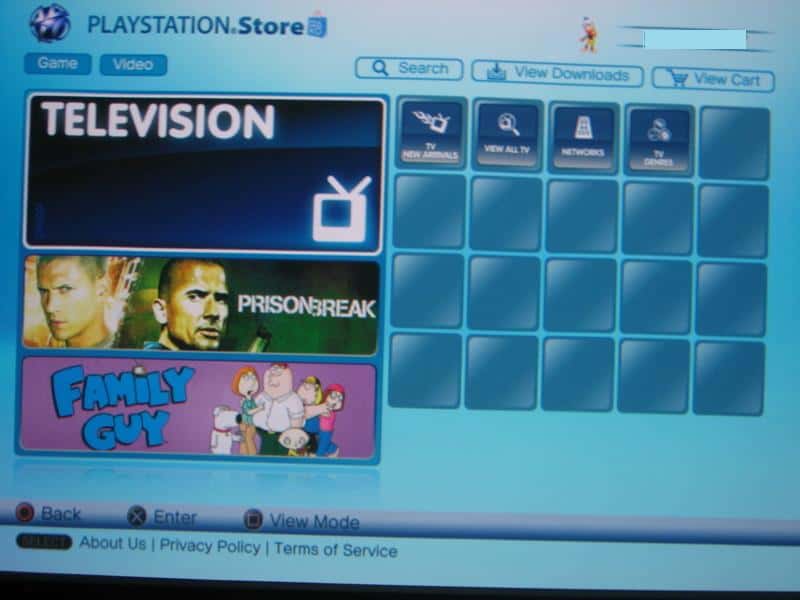 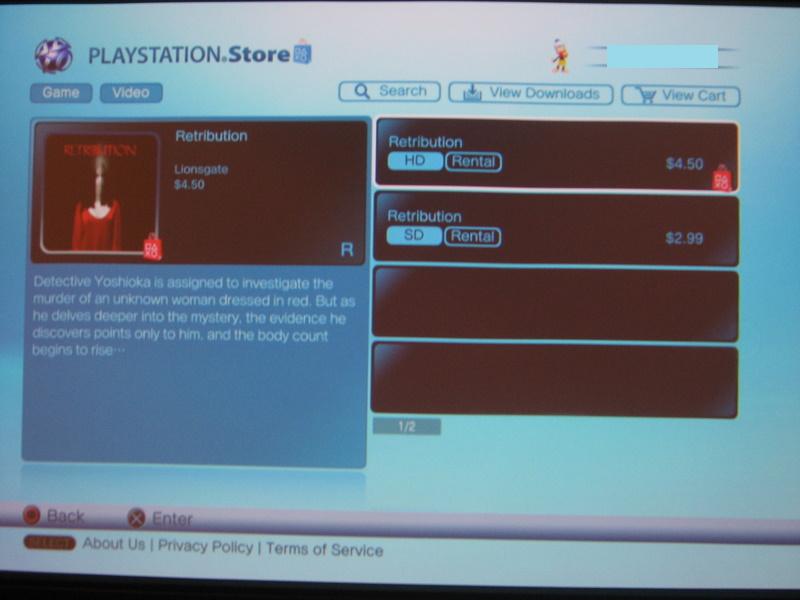 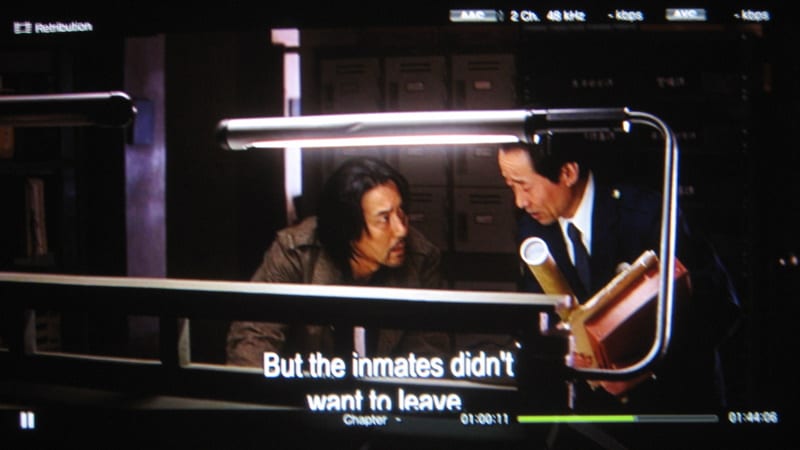 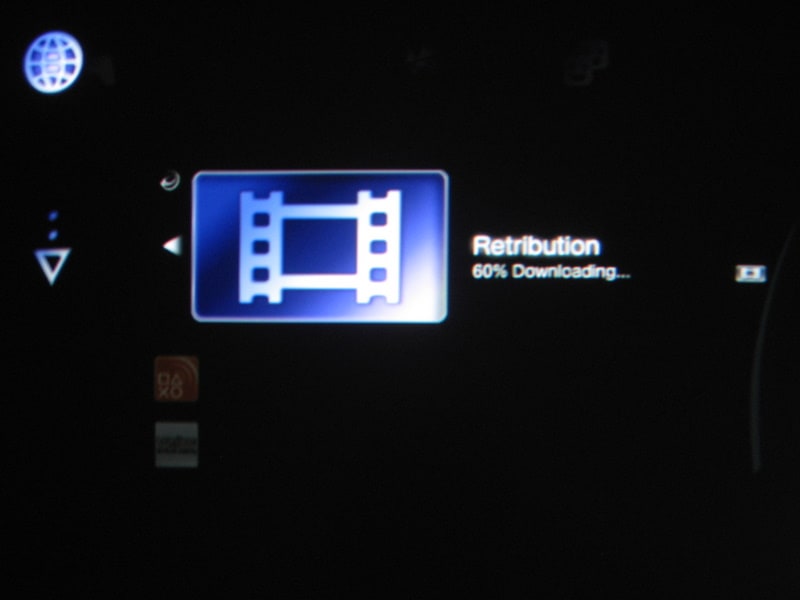