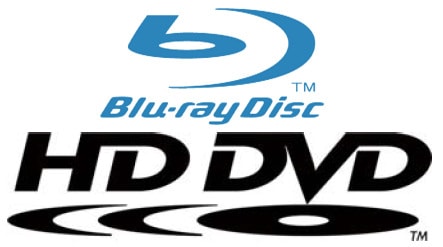 A few times every decade, we witness massive format technology wars that cost millions of dollars, pit large studios and technology companies against each other, and leave the typical consumer confused – although in this case, amused.

What’s at stake? Money of course.

And lots of it.

Whoever owns the standard, will own the consumers pocketbook, because it all comes down to content and licensing.

This week was a particularly great week for the Blu-Ray vs. HD-DVD format war. Paramount made a surprising announcement on Monday to exclusively support the HD format, despite Blu-Ray’s mounting early sales lead, with some reports suggesting a 2-1 retail advantage. Amazing what a $150M incentive will do. The Blu-Ray camp fired back a day later with a series of marketing and PR aimed to up the ante, by promising a series of marquee releases and lots of monthly content.

This is a great eye-witness event. You have Sony on one side (along with Dell, Apple and Panasonic). And Microsoft on the other. For the studios you have Paramount (now on the HD camp at least for 18 months) and DreamWorks against MGM, Disney and Sony Pictures among others. At the retail level both BlockBuster and Target earlier this year announced their exclusive support for Blu-Ray.

So here’s my top 5 things to think about, and a prediction or two:

1. Marketing vs. Technology vs. Distribution and Content – which will ultimately tip the scales?

2. It’s deja vu all over again – at a Stanford executive program in marketing I took last year, we reviewed a classic battle with similar parallels. That was Kodak vs. Polaroid in the camera and film markets. One for the ages, no doubt that extended over decades. Then there was Beta vs. VHS as we all know from the 1980s. Is there anything to learn from these past corporate battle royales?

3. By Christmas 2008 high definition DVD will hit mainstream – My pick as I’ve said before is Blu-Ray. It is winning with broader distribution (Target, BlockBuster), better content and Studio support, superior technology (larger capacity), and, let’s not forget, better marketing.

4. Are video game consoles just for games, or are they full-blown multimedia systems? Also, can they be the trojan horse that also tilts the format war in Sony’s favor thanks to built-in Blu-Ray support for every PS3 system? Note that Microsoft took the middle ground by professing support for the HD-DVD format, but offering it as an add-on. This smart decision gives them an easy out to Blu-Ray in 2008.

5. This will take longer than the VHS to DVD revolution. Of course, there was no format war there of significance; DVD was the defacto. However, consumers were driven by much greater benefits to switch to DVD. No rewinding! Crystal clear picture! All those extras! Flexibility of sub-titles and multiple languages for global markets! But with high definition DVD (either HD or Blu-Ray) the only real advantage to consumers is slightly better picture quality. For a lot of people that won’t matter. Why pay $19.99 for a Blu-Ray with marginally better picture, when you can get the DVD for $4.99? Purists and early adopters of course will. But to cross the chasm, we need mainstream adoption.