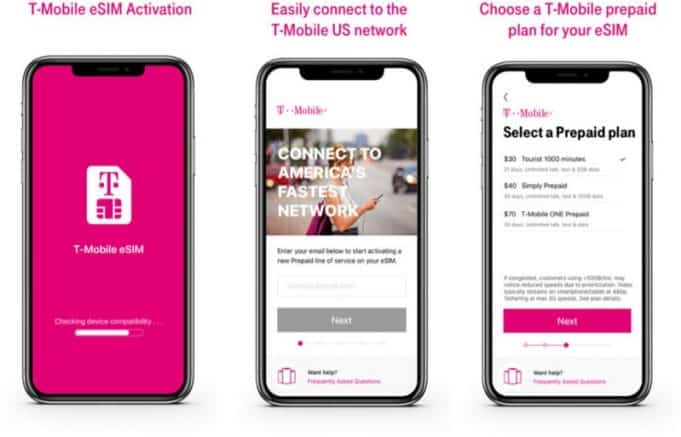 eSIMs are slowly catching on, and, thankfully, making activating phones easier. T-Mobile is the latest U.S. carrier to offer support for the technology on new iPhones, including the XS, XS Max and XR.

Earlier this month Apple rolled out iOS 12.1.1, a minor update, but one that enabled iPhones to use eSIMs.

As the name implies, an eSIM is an “embedded ” version of the long-known and used electronic subscriber identity module. It’s used to activate cellular service and contains important information related to your phone number and identity.

In the past when you wanted to change phones or phone numbers or cell provider you had to physically remove the SIM card and pop it into the new device and/or get a new SIM altogether. The process was (and still is) inconvenient, error prone, and, of course, became the number #1 reason worldwide why bent paper clips are mysteriously found randomly in desk drawers.

With an eSIM this setup is done entirely by software (typically an app) without the need for a physical SIM card. Phew.

It make take a while, but we expect eSIMs to catch on pretty quickly given their ease of use. Yes, they’re handy for consumers, but they’re also beneficial to carriers like T-Mobile and AT&T as well since they don’t need to track and mail out physical cards. A small expense in the world of telecommunications, but an expense nonetheless.

Verizon, AT&T and T-Mobile have now all introduced iPhone eSIM support. T-Mobile users will want to download the T-Mobile eSIM app to get started.