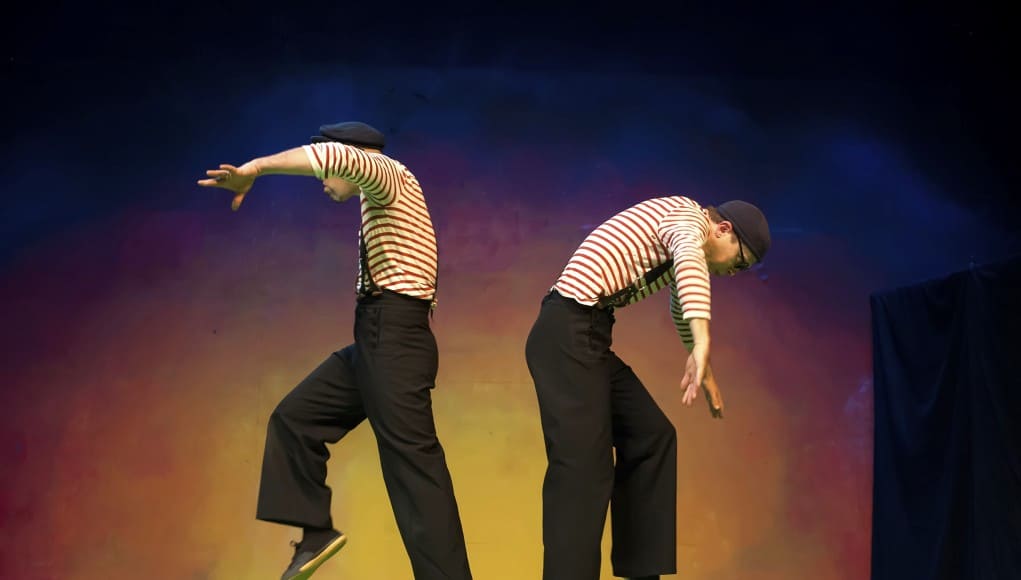 The Submarine Show, conceived and performed by Slater Penney and Jaron Hollander, opened for a limited run at the Aurora. This fast-paced two-clown show wowed at both the FringeNYC 2015 and the 2011 San Francisco Fringe Festival.

Within seconds of the lights going down, kids in the audience began to burst into irrepressible giggles at the sight of Penney and Hollander, as if all were privy to some inside joke. That shared joke didn’t leave adults standing outside, as The Submarine Show’s sight gags work on multiple levels, including one involving very un-childlike substances.

Watching these two conjure up all these worlds on a bare set with nary a prop or set is a trip unto itself.

Even before they begin to move, Penney and Hollander are just plain interesting to look at. With a wisp of a beard, Hollander looks like a cockeyed Vladimir Lenin in a Greek fisherman’s cap, just like the famous photos. Penney towers above him, writing whole chapters  with his eyebrows and goo-googley eyes behind the Mr. Magoo glasses.

Hollander and Penney give “effective use of space” a whole new meaning as they scamper up lighting trees, across the audience, and up onto the partition dividing seats from the entry way after their submarine crashes, the key breaks, and in some psychedelically inspired insanity they end up machetes in hand, hacking their way through the jungle surrounded by apes before morphing into surgeons scrubbing down, all executed in a mad cap mix of pantomime and vocal sound effects.

While there’s no great emotional complexity here, watching these two conjure up all these worlds on a bare set with nary a prop or set is a trip unto itself. These guys are the real thing, with Hollander a former clown with Cirque Du Soleil, and Slater, the current artistic director of the Kinetic Arts Center in Oakland. Together, their performance can steal your mind.

This one-hour show is at Harry’s Upstage at the Aurora through October 25th.