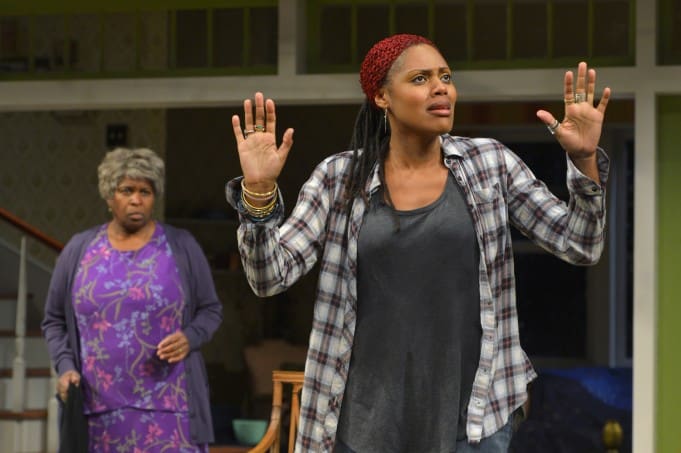 If you look roughly 74 miles southeast of New Orleans, you’ll find Head of Passes. Wikipedia defines it as the main stem of the Mississippi River, before it branches off into three directions. However, “branching” implies that there’s land here – and there’s darn little above the water line to make such distinctions. Place names drop off entirely, so don’t go looking for towns or villages because all you’ll see are ponds (Woodyard, Bob Taylor’s Pond, etc.), bays (Zinzin, Riverside), bayous, (Sawdust Bend), and combinations thereof, like Bottle Bayou Pond.

The other Head of Passes, which just opened at the Berkeley Rep, doesn’t contain all the water from Head of Passes, but that’s not for lack of trying. More stage magic went into managing the rain, flooding, and resulting destruction in Head of Passes than you’d imagine possible. However, waxing technical misses the point entirely. This play is really about the heart – a fact that’s underscored, not upstaged, by scenic designer G.W. Skip Mercier’s extraordinary efforts.

Maps might be a little misleading though, because people do live near Head of Passes, inhabiting slender barrier islands that disappear off the map with major storms. Playwright Tarell Alvin McCraney nails the tension that goes with living in what amounts to a wildlife preserve, where forces far more powerful than our paltry human endeavors are always at work.

McCraney brings you to the home of an elderly African American woman, Shelah (Cheryl Lynn Bruce), where her adult children Aubrey (Francois Battiste), and Spencer (Brian Tyree Henry) are preparing a party that includes her doctor (James Carpenter), Mae (Kimberly Scott) and Creaker (Michael Shepperd). Shelah is a force of nature, holding everything together for her family. The relentless rain is as much a character as any of these, pounding outside the big bay window and coming through the roof.

Press releases, program notes, and interviews with the playwright consistently note that Head of Passes is about faith. Artistic Director Tony Taccone writes, “Tarell has written a play about faith for people of every persuasion, from those adhering to orthodox religious principles to fervent atheists.” Later he concludes “Shelah Reynolds… invites us into the arms of our own suffering. Into the wellspring of what lies beyond us. Into the arms of faith.”

The materialist in me just doesn’t get this faith stuff – unless it’s that old saw about death and taxes. I’m not saying that Taccone’s observations – and those of almost everyone else who’s seen this play, which was drawn from the Book of Job, aren’t true. It’s just the word faith doesn’t speak to everyone – and this play is far too important to take the chance that some might be inadvertently turned off.

This play is really about the heart.

A different way to wrap your mind around Head of Passes is to think of it as a variant of Joan Didion’s The Year of Magical Thinking – re-morphed culturally for the bayou and performed by a cast with killer acting chops. That re-morphing gives this material a depth and resonance we don’t otherwise see.

While action in this 2 hour and 10 minute play develops slowly, you’ll be glued to every detail. You need this time to get to know these people, what their agendas might be, and how Shelah relates to them.

Cheryl Lynn Bruce played Shelah when the play first opened at the Steppenwolf in Chicago – so she’s about as close to the playwright’s vision as a performer can be. “Powerful” doesn’t begin to describe her character or her performance. What reserves she draws upon to perform the second act night after night remains a mystery to me.

Bruce’s extraordinary abilities aren’t the only thinking that makes Head of Passes worth catching. The James Carpenter brings us a lanky Dr. Anderson – who seems humbly aware of the limitations of his profession. The curious features and tender disengagement of Sullivan Jones – cast as Angel – move the story forward.

Head of Passes runs through May 24th.  It’s well worth spending time with this one.